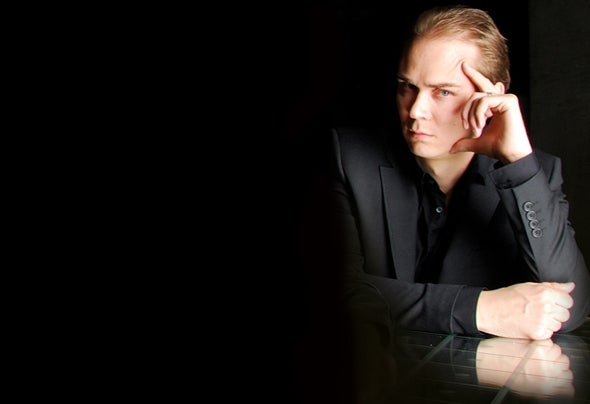 Morozov, Mikhail E. (2 October 1978, Moscow) - Russian saxophonist, composer, conductor, arranger and producer. Born in 1978 in Moscow. He graduated from State College Brass Art on saxophone. The basic skills of playing the saxophone mastered by legendary Soviet Performing Arts Tovmas Gevorkyan. While he was studying at Goody (State College Brass Art Moscow) on the personal initiative participated in several international competitions, where success becomes the winner. He has performed with various orchestras and musical groups, not only in Russia but also outside the Soviet Union. In 1997 he entered the Military Conductors faculty at the Moscow State Conservatory named after PI Tchaikovsky. Mikhail Morozov first time training and service in the VDF gives all its efforts on new items related to the specialization of the institution, which further contributed to a better understanding of music. This pronounced and evident in the work of Mikhail Morozov. Teaching staff, teaching at the time - cadet Morozov consisted of professors, associate professors and distinguished professionals of Arts (AG Migaluk, J. K. Smirnov, NA Samokhvalov, AF Umanets, TP Humenné NN Deeva, DI Mamedbekov, BG rotten, I. Likhachev, GA Makarov, VD Ivanov, VV Myasoedov, VS Chugreev, S. A. Surovtsev, VE Lysenko, VN Grachev, C. W. Daletskii). During his studies at the Military Faculty of conductor Mikhail Morozov creates several musical groups in tandem with the pianist (S. Akulov, S. Aleev), who not only jazz and popular music, and experimenting in the creation of their works. Dropou ts a year in the VDF Mikhail Morozov at will have to drop out from the end of 4 courses. The main reasons for withdrawal from the Faculty of Military conductors was lack of time (due to frequent performances) and the desire for new and contemporary musical movements. In the future, knowledge of classical rules in arranging and analysis of contemporary electronic music have found application in almost all the compositions of Mikhail Morozov. Also, this eclectic noticeable in performing skills - saxophone during a game can be melodic, slow, harmonically not as persuasive in the classics, wandering and atonal as the new currents of jazz, rhythm and simple as in a modern and popular music. Since 2001, Mikhail Morozov in search of new musical sensations decided to leave Russia, and three years of touring Europe. Work-abroad are naturally created a new atmosphere in the understanding of music, covering for some time to listen to Russian pop culture. Direct communication with the culture and art of the Western left-quality print on musical taste of Michael as a saxophonist and composer. After three years of performances in Germany, Belgium and Holland, not self-asserted his musical ambitions, Mikhail Morozov returned to Russia. When he returned home to Moscow, begins to create the conditions for new projects. This period for Michael was the most fruitful and commercially impartial in writing the musical material. Focusing on your taste in music he composes a lot of music that is characterized by its individualism, an unusual combination of styles and well-calibrated form. Composing music, creating arrangements and her performance on the saxophone at the time was the main creative enthusiasm and passion. However, this is not the only direction in composing. An encounter with a talented and creative individuals (Maria Stadnichenko, Dmitry Saba, Laura Grieg) give a new impetus for writing Since 2005, Mikhail Morozov, giving more time to his live performances, speaking in Russia and abroad, with their musical show project: "Syntheticsax", "Ultra Jazz", "Sax Girls", "Sax. Also participating in joint projects "Soft extreme", "Dieblacktie", "Soul beat", "Take 2", "Morfius", "Laura Grig".