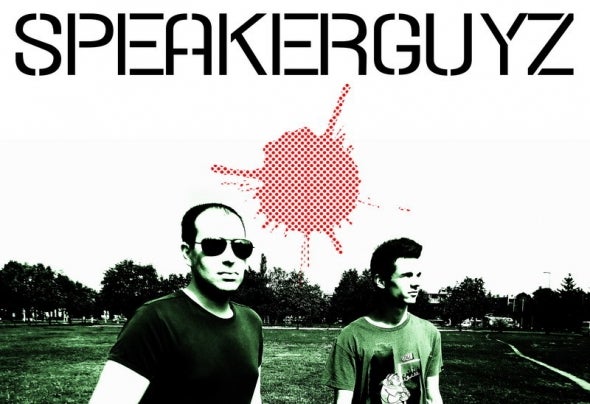 Speakerguyz is a Hungarian Hard Dance producer duo, also known as Arnold Kalmar and Máté Sebők. The duo was founded in the summer of 2013. 3 weeks later was released they are dazzling single, called Galaxy. The duo before establish, they have been more than 10 years music experience.Arnold's DJ carrier started 2000th May. He worked for 5 years on the many small clubs and internet radios.August 2005 historic turning point in his life, because he was playing the greatest and most popular open-air music festival on Hungary, namely on the Budapest Parade. The success lasted longer and he received further invitations from other countries. He was playing on United States, Japan, Poland, Czech Republic, Switzerland, Germany... Since summer of 2008 not only as a DJ/presenter, but also works as a producer. Nearly 40 mashups/bootlegs and unofficially, officialy released remix has been made. This inspired and encouraged to create unique and new things... The beginning of 2009 received an agreement from the Rádió 24 (Dunaújváros). He started the Pestige Night Radio Show (collaboration with Bukor D.) and they have achieved outstanding results. More than 30 000 listener/weekly! November in 2010 he worked presenter and DJ on the Mix8 TV with the number one Handsup DJ on Hungarian, called: Bass Rider. In the year 2011 less DJ-action and more producer work was characterized. From the year of 2012 may, his music taste reshaped and opened to new direction. Currently, the Hard Dance - within that prefer the more melodic Hardstyle lover works. The 2012 year was given the opportunity on several occasions to the Hungarian Hardstyle event-organizer's team, including two shows his colors spinning disks. The general public in the past more than 10 years, have known as DJ Home. But the DJ Home project was ended. Justification was that the more time you devote to the new team , working together with lift , represented by the duo Hardstyle music with higher quality level as well as at home make it even more popular.Máté is the another member on the team. He interest in music since the early 2000's can be made from the very numerous selection , and subsequently a series of mixes and got acquainted with the world of music production. Works produced since 2006 has been launched and boasts more than 150 completed works of art .And of course a myriad of design and construction in progress idea. Made up of several different styles, they are well separated , as a different project allows.As 'DJ Seaby' - as well as the formation 'Lazybox' Handsup and Euro Dance, 'Sebeko Jr'. as the wounds are characterized by Trance works. Addition to producing his work acquired a great routine in radio, as well as the music-making related to education, as sound technician .Knowledge of the members of Speakerguyz duo can be traced back to October 2010. A common acquaintance and wearing the same style of picture has quickly become good friends in the other way - things private is the same approach guys. The Hardstyle is like the novelty of the work produced, and also the challenge inspired them .