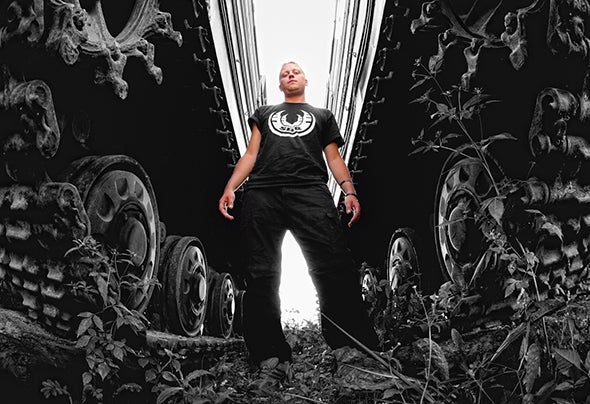 VIRGIL ENZINGER is an outstanding Techno Producer, Live Act and DJ. Virgil is widely regarded as the original creator of the DARK TECHNO genre. Virgil's music carries a distinctive mark and he has irresistibly drawn the attention of the audience in clubs and on festivals such as KAZANTIP Z19 2011 (Ukraine), A-ZOV Festival (Sea Of Azov, Russia), NATURE ONE (Frankfurt, Germany), DEFQON 1 (Amsterdam, Holland), TRESOR (Berlin, Germany), MISS LIBERTINE (Melbourne, Australia), FABRIK (Madrid, Spain), U60311 (Frankfurt, Germany), FORSAGE CLUB (Kiev, Ukraine), etc. Virgil has worked with artists such as Chris Liebing, The Advent, Submerge , Eric Sneo, and many more. He has released his music on labels like CLR, Kombination Research, Nachtstrom, Codeworks, Planet Rhythm, Naked Lunch, Masters of Disaster, Impact Mechanics, Der Hut, Driving Forces, etc. Virgil has done numerous remixes for Ken Ishii, Sven Wittekind, Bas Mooy, Tom Hades, Brian Sanhaji, Submerge, Glenn Wilson and many others. His tracks, mixes and remixes are standard repertoire on radio shows such as Dave Clarke's WHITE NOISE or Dr. Hoffmann's BLINDSPOT. After succesfully launching his own label I.CNTRL in April 2010, Virgil has now started his second label U.CNTRL - the first release will be out on 01-May-2011 and feature the full-length album CHAOS TO ALL - BLESSINGS TO THE CHOSEN by Austrian producer SYNCOPE. Using SYNCOPE's unique Abstract/Dark/Misanthropic/Extreme/Electronic Music style, it is different from all what we have heard before on I.CNTRL. The Dark Techno style will be delivered by Virgil Enzinger's remixes and by some of the most reputable artists in the electronic music scene. All I.CNTRL / U.CNTRL releases are available on Beatport and all other major download portals worldwide.