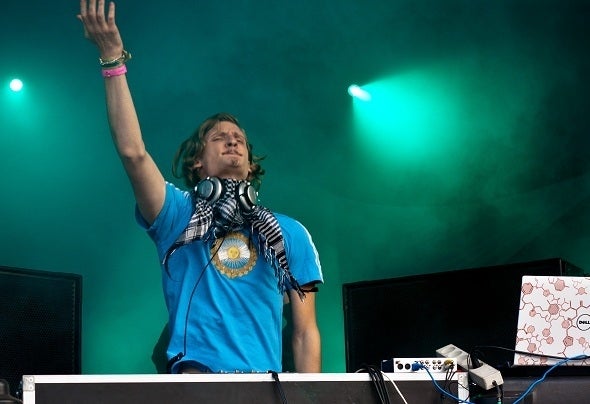 Since his first steps, Franco Bianco has been related to music and since then, he has polished a personal sound. Though he is an electronic musician orientated to the dance floor, his work covers from ambient or music to listen at home, to techno merged with folk, country and tango. That's why he has been mentioned as “the Danny Boyle of electronic music” by some European media. Currently settled in Switzerland, his music took him on worldwide tours (from Australia to Lebanon, through Japan, USA and Egypt), with more than 200 presentations in 27 different countries during the last 5 years. In many European countries, there have been queues to see his shows and in Cyprus he is a referent of the electronic music scene. His YouTube videos and social networking pages have thousands of visits, and he frequently does interviews for local media of the countries he is visiting. His vinyl records (the last three being sold out) are played by international artists like Hernan Cattaneo, Laurent Garnier or the mythical Danny Tenaglia, among others. Every year, from November until the end of December, he also presents himself in South and Central America, by offering a tour in these regions. He has played in Ecuador, Colombia, Mexico, Uruguay, Dominican Republic and in Argentinean mega festivals like Telecom Personal Fest (2004) as well as the last editions of Creamfields Buenos Aires (2008, 2009 and 2010). Talking about European Festivals, in 2010, he played at the well-known Circle of Love Festival, and in 2011, he played on the 1st of May at the Görlitzer Park as a headliner, in front of more than 7k people. From 2010 to 2012, he participated every year at the Midsommar Festival and Secret Island Nation (Switzerland and Sweden respectively). His last festival performance was at “Fête de la Musique” in Geneva, as a headliner in front of more than 5k people on the main stage. His latest project was a Vinyl & CD edition, with remixed versions from singer-songwriter Jorge Drexler (winner of an Oscar in 2007), which he produced together with Nacho Benedetti. This important album also included the remixes of Mike Shannon and Jesper Dahlback. Franco has presented this album in 2011, from September until December in 23 European and American cities. On his SoundCloud page, you can listen to the Tour-Closing night, with the sound of the crowd. In this way, you’ll feel the energy of this unforgettable presentation. In 2012, after 5 years of continuous touring and launches over the four continents, he finally found the time to work on his new album to be released mid-2013. He was also active with various DJ sets presentations instead of his usual LIVE set-up, that kept him busy in Europe and America during the last months of the year. The future of Franco Bianco is certainly similar to his music releases, totally eclectic and unpredictable.