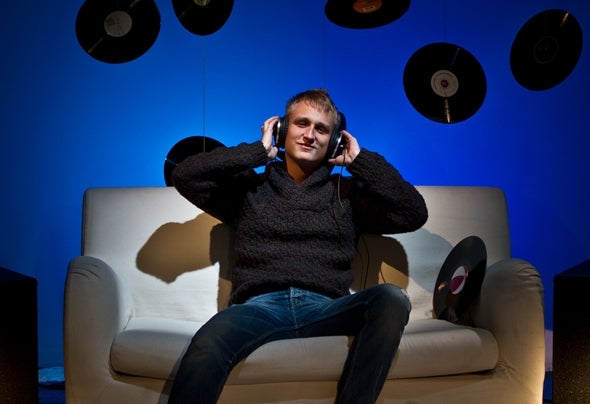 A bird that is flying above the clouds,an airplane that can be seen up in the sky or a firecracker that explodes high above you on new years eve,all those things have one thing in comon,they give you feelings such as luck,freedom and statisfaction. This is the philosophy of ruben sky,a young german dj that has been born in the year of 1985. Wether as a dj or as a producer ,he is always trying to make the crowd feel lucky,free and statisfied with his beats. It is his philosophy and his passion for music that prove that he is not one of the upcoming artists that are only into music because it is trendy or because they found a suitable hobby for themselves,for him it is a way of life. It is not a wonder that he has been a support act for many big names in the world of modern electronic music ,such as lexy and k-paul, Der dritte Raum,Legowelt,Afrilounge and many more during his career. He has already founded his own label and is working very hard to produce new beats and to creat e a new and unique sound. The young german has never released anything of his stuff because he is always looking for that extra piece of perfection. He kept on practicing and producing untill he knew everything about his musical tools and untill he felt he is ready to release his music. His famous events “Electric Blue” and “Electric Pearls” have been very successful and have been important for his young career because he happened to gain a lot of popularity in his hometown afterwards. Ruben sky aka Rouven arheidt has already played in many clubs in europe, from his hometown karlsruhe to several locations in croatia,everywhere people where amazed by his individual style of performing. His personal highlight has been his performance at “Das Fest” where he rocked and celebrated with a crowd of over 10000 people. Ruben is willing to put all of his energy and passion into his music to be able to celebrate many more of those amazing moments in his life.