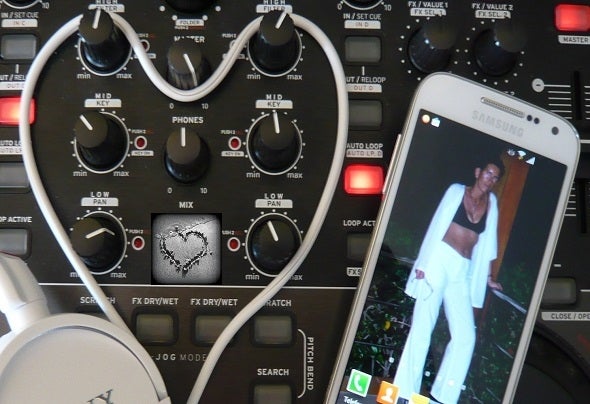 As a small child, music was everything for her. If she wanted to record the program Disco (I.Richter) with her mono cassette recorder all had to be very quiet, because her cassette recorder only had a microphone, she sat close to the TV. She wanted music, no matter how! She collected discarded boxes in the neighborhood, and tinkering this at the cassette recorder. Later, she got a record player, had almost everything to listen to music and live. She sang and wrote lyrics, thoughts and feelings to music had become. Tapes were edited by her so that you only hear the music. The music is an integral part of her lives, no matter where she is, she always listens with one ear! There were many phases in her life where she had put away music but in her heart she continued to play ....Before it was the cassette, today her friends get a CD with her mixes, the music combines a long life. Since 2009, she even makes music herself, she has a large following on yt. After it was then played for the 4th times one of her tracks in Germany's biggest dance radio "Sunshine Life", she donated one of her tracks for a charity compilation name "Music4Life - The charity CD" and then published its first title.......with the release of the title "Back on track" under the label YouVVmusic and her first Top 10 hit .... Her own Remix of Wants it, hits like a bomb. No 1 in the sales charts. That must be reckoned with Djane My Canaria, she showed shortly afterwards with the release of her Get that Volume EP. So she gave people plenty to stir, as she placed herself in the same Top 5. The next No.1 hit came with her All Or Nothing of this EP. 11 days they could look forward to number 1 in the UK Juno Minimal / Tech House Charts..... it goes on, she is constantly working on new songs....Let's pull you under her spell! Her thoughts & feelings become to music, she hears the music, she sees the music and she feels the music. Music is my life - Djane My Canaria