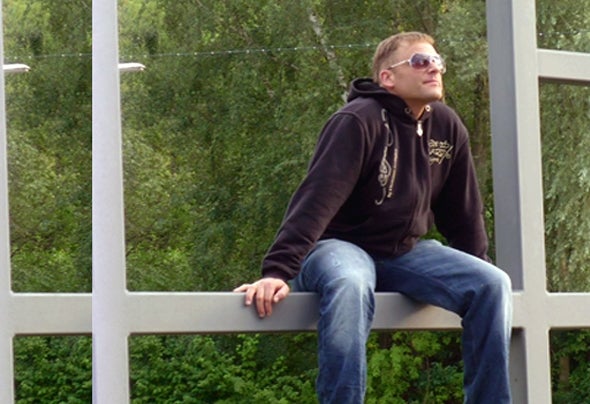 ...makes already very early first acquaintance with the music. His uncle gives him-to his horror seinem10 mother-to. Birthday a drum on which Timo with joy and eagerness rhythms of the first tests. The genuine Weselaner the patience of his parents was a tough test, but would also like professional hockey players have become, but it packs the love of music. Initially still on the HIP-HOP trip, he bought his first plates and tests his Mixingtalent initially borrowed to the turntables in his basement party. His first gigs at private parties should be the start of his career will be. In the first half of the 90s is Timo from DJs such as Emmanuel Top influence and begins to strengthen house and techno records in his kit installed until 1996 as a whole, he electron stands behind the decks. Since he represents in countless clubs in the Ruhr demonstrate his skills. Particularly striking is his perseverance, even after hours of mixing, he has still not long enough and no error creeps into his performance. He shows his art in the small friends, it seems impossible for him not infrequently, the needle Available. Fully one with the music, totally immersed in it, he conjures plate to plate a world full sounds and rhythms like also-times longer than eight hours. Who knows Timo Manson, who knows what the audience expects when he stands behind the decks. The year 2005 was quiet by the beginning of the study to Audio Engeneer at SAE Institute. Productions are already in the works. Under the motto Ehrlich worth longest, feelings are stuff .... Here is a foretaste of Electro - Jazz - Rock