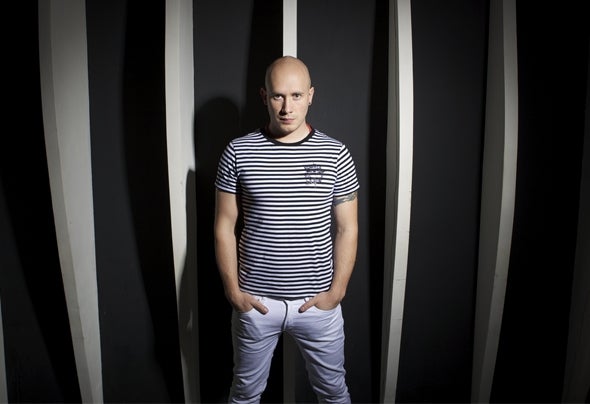 This story of a man with a weird name Blackfeel Wite started back in 2005, when a guy called Jenya Gagarin got bored with needless fuss and tried his hand as a musician for the first time.Music appeared to be a real drug ¬– not even a day was worth living without it. In 2006 Blackfeel Wite signed for is first release at a British label CLIMAX. This event was so inspiring, that from the moment on the sound studio became his home.In the same 2006 another musician – Sasha Virus – joined the project. This collaboration resulted in the following releases: The End (Progressive Grooves rec.)Sea still love you (Progressive Grooves rec.)Besides, in 2006 Blackfeel Wite and Sasha Virus got the “Breakthrough of the Year” award by DI.FM radio, and managed to gain the lead in the contest for the best track for AXE brand.At the end of 2006 Blackfeel Wite gets back to the “solo way” and signs up for his first vinyl LP called “Not Gay Song” at The Palm Beach rec., Belgium.In 2007 Blackfeel Wite meets Pavel and Vitaliy from MOONBEAM project. From there on the musicians start their fruitful cooperation. Blackfeel Wite acts as the top artist of Moonbeam Digitall label, and at the same time becomes the official voice of MOONBEAM.Collaboration kicked off with “First Night” track from Blackfeel Wite, remixed by Moonbeam and J-Soul. The release was so successful that reached Beatport top-20 to stay there for over 3 weeks, and was supported by dance-music stars worldwide!In December 2007 Blackfeel Wite’s Live performance opened the TOP 100 DJ`s Russia – an exclusive annual award ceremony held by DJ.ru portal.In 2008 Blackfeel Wite releases one more LP with his most conceptual track – SILENCE, remixed by J-Soul, Stereofunk and Saint Martinique, at a German label Pimont rec. The release found support from such dance music guru as SASHA, Roger Sanchez, Nick Warren and many others.Besides, 2008 is the birth year for a series of original and remixed tracks by Blackfeel Wite, among them 2 joint works with MOONBEAM, recorded at the famous Dutch label Oxygen (Spinin). Apart from these tracks, 2 more joint works with MOONBEAM were included in their Storm of Clouds album, which was issued in the same 2008.2009 is primarily remarkable for a new turn of “First Night” popularity. You could find around 7 different OFFICIAL editions of this track - including the remix by the world-famous DJ and producer Marcus Schulz - that made its way to the Armada Music Top-40 tracks of the year.The same 2009 was a launch of fruitful collaboration with J-Soul project. It includes both joint works and remixes, and numerous LIVE performances with this musician.In 2010 a Dutch label Black Hole rec. released another album of MOONBEAM called “Around the World”. In this album you can find a joint creation of MOONBEAM and Blackfeel Wite called “Song for a Girl”. Later on, the same Black Hole rec. makes special release of this track with a remix from Moguai, and publishes a video on its official channel at youtube.com.In february 2011 Moonbeam Digitall released the debut album of Blackfeel Wite – “TOSKANA”. The album shall comprise 10 original works, recorded from 2009 to 2010.