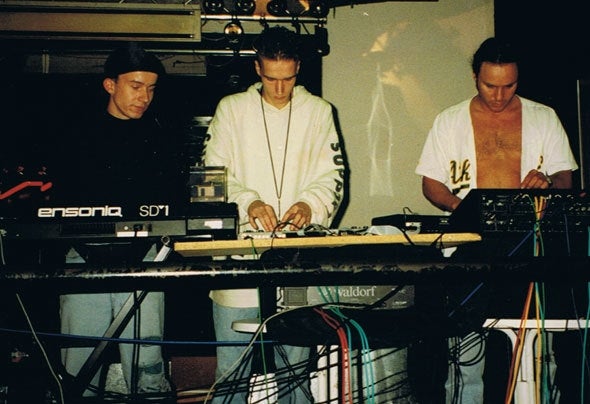 At the age of fifteen he does his first DJ job. Ever since that time MIKE S., who`s civil name is Chris-Maico Schmidt, gets to know and lives through all types of music. So his roots go back to Soul - Funk - R&B - Mainstream - Pop - Wave - Rock - Disco - Pair Dance! In 1991 records of people like Tyree Cooper, Franky Knuckels or Paul Simpson cause him to favour one special type of music: Techno-House.After he workes in several clubs in the Stuttgart area until the end of 1993, he is the resident DJ in the discotheque “Cave Club” in Salzburg(Austria) every Friday in 1994. For example is he responsible for one of the most successful releases on the cult label "Harthouse" (Frankfurt): the classic tune "Adventures of Dama" with his project of that time "Cybordelics"! After numerous record productions with differnt partners (see discography), he also produces the music for a movie-commercial, together with Ben E. Mettin, the partner of his project "MikeroBenics". During that time MIKE S. is cofounder and partner (with Marco Zaffarano) of the branch of Delirium Records in Stuttgart as well as owner of the record label Suspect Records (shelved for the time being).In late 1996 he moves from to Stuttgart to Cologne, at the end of 1998 to Munich. The reason: evosonic radio. The only European radiostation broadcasting 24hrs electronic music is from the very beginning in 1997 under his considerable influence.Since 1998 he is the manager and programme manager of evosonic radio. Besides that he edits his own radioshows on saturdays like “Ohne Flax” (satire), “Mike Like” (new releases, unreleased tracks, in the mix) and “Backfisch” (techno classics) on Sundays. During the time at evosonic radio, one of the most important events was in January 2000.DJ Mike S. won the German Dance Award in categorie “Medium”.Since the beginning of 2002, Mike S. is back in Cologne. He lives there and works as a DJ and Producing teacher at “Vibra DJ School”, it`s europeans ́ successfully school for DJs. On 2012, Mike S. startet a comeback as a producer, alone and with no partners! Two new releases come out on june and juli on the recordlabels "Code2Records" and "Harthouse Mannheim"!!!!!