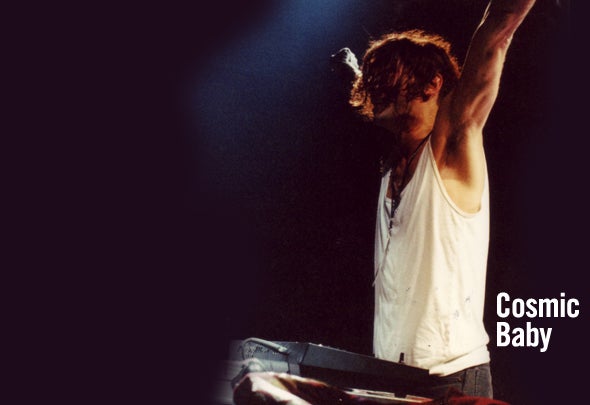 Harald Blüchel was born in Nuremberg in 1963 and now lives in Berlin. He began his classical piano training in 1967 and received a scholarship from the City of Nuremberg to study at the local Music Conservatory in 1970. He began his studies in composition at the UdK of Berlin (Berlin University of Arts) in 1987. His enthusiasm for electronic music as the most authentic form of contemporary music drew him to the Berlin techno scene where under the name of COSMIC BABY he became one of the most important artists in the global scene between the years 1991 and 1999 . The albums “Stellar Supreme” (1992), “Thinking about myself” (1994) and “14 Pieces” (1996) are among the milestones of techno music, and the track “Cafe del Mar” released under the name of ENERGY 52 together with Paul Schmitz-Moormann is probably THE quintessential anthem of an entire music generation. As a live performer he was a headliner of the international club, rave and festival scene together with “The Prodigy”, “Orbital”, “Underworld” and “Moby”. Following an increasingly critical reflection of his role as a person, artist and product he moved away from popular market-oriented structures and under his real name began releasing more artistic works that, in terms of content, composition and sound, are more at home in contemporary classical music than popular music. Now, all the works of Cosmic Baby have been released for download on all major mp3 platforms. From June 2007 onwards not only the legendary original albums but also many other unreleased pieces and rarities will become successively available. More information can be found at www.cosmic-baby.com