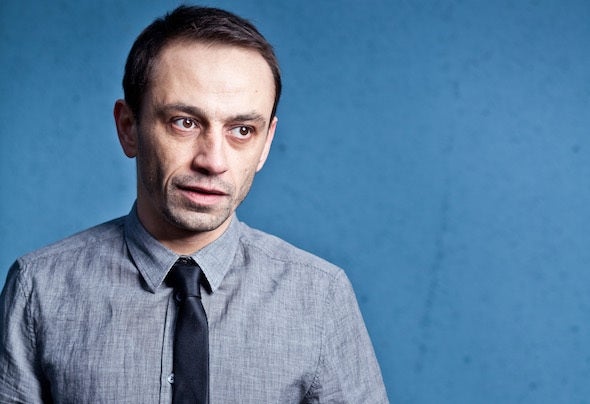 David K represents something all too rare in electronic music today: an artist who makes music first and club music second. For him, emotion is paramount, the pop format has its perks and original material is always better than a sample. Late at night and early in the morning he dances alone in his studio, tapping away on his keyboards and throwing together arrangements on the fly (a pianist by training, he can’t bear to make music slouched over a mouse).David K’s roots are in Paris, where he lived his entire life until 2011. He grew up steeped in the his father’s records: Bob Marley, Otis Redding, Serge Gainsbourg, Madness, Blondie, The Clash, disco, classical, czech waltz (of all these, Gainsbourg is probably what comes through the most). He started DJing in the late 80s on a makeshift set of gear, complete with a radio and tape deck, but once he hit his first rave in ‘91 he went straight for the Technics 1200s. He made his recording debut in 2002 on Sismic Music, a small Parisian house label, and soon fell in with some key figures in the Paris’ underground club scene, such as Dan Ghenacia, who brought him into the Freak n’ Chic stable, and Phil Weeks, who put out one of his earliest 12-inches, Yo Chicago, on Robsoul Recordings.A turning point came around 2005, when Sven Väth playlisted one of David K’s tracks: Free Kit, a one-sided single with Heidi on vocals. Cocoon ended up releasing two of his records, Nutty Rush and Tender & Sugar, and gave David one of his best gigs ever: his first live set, at Cocoon Frankfurt and after this of course more gigs all around the world were followingg. In regards of his last releases on Dame Music or Rue de Plaisance, Visionquest or BPitch Control. This is the perfect timing to launch his very first album project who take part to the new Tiefschwartz's imprint : NAU in collaboration with dOP, Guy Gerber or Ellen Allien to name a few.He's out of range, NAU !