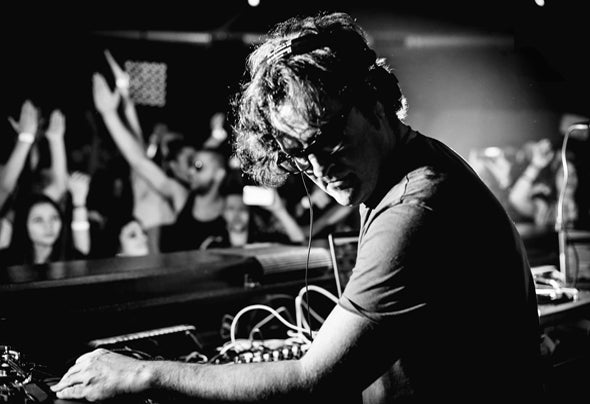 Miki a.k.a the Dolphin started his professional career during 80s DJing with Afro, Electronic, Disco and Funky, New Wave, Dark and British Dance music. His passion for the radio grew through his local radio stations (Radio Ferrara Centrale and Extasy FM Station) and he teamed up with his friend Andrea Melly as leaders of the group Photogram, with whom he performed live and produced his first two singles, Europe United and Beathouse. His evergrowing experience brought him, along with the advent of house music, to ride the exploding club scene first at Bahia's Club and then at Club 64 on Elba Island.At the end of 1990 he held the residency of the 12-hour sessions at Club Imperiale in Tirrenia and the hype for this phenomenal DJ was strong, both for the novelty of after-hours and for the rave music that rapidly started gathering large crowds. Looking for suitable partners to share the ride, he found two that are on his same wavelength: Francesco Farfa and Roby J (R.I.P) opening them the door of his prestigious console at Club Imperiale.At about the same time they invited him to a party in Paris held by L'Express magazine's music journalist, Luc Bertagnol. In a short space of time Miki was sharing nights at legendary Ibiza clubs like Space, in the free parties at Salinas beach and in Paris with Cosmos Fact and many other venues. Miki became resident DJ at the after-hour session at Club Duplé (North Tuscany) with a big number of fans following him and in 1992 A.D. Antonio Velas quez invited Miki to spin on the turntables at Insomnia. In September he got residency of their Divine Stage, the principal floor in the project Insomnia Discoacropoli d'Italia. At the start of 1994, Miki left Insomnia at the peak of its success and started playing in a small club Paradise which immediately became a "cult" club of the scene, and during the same period, DJ-ing also took Miki to other venues abroad in Switzerland and in France. In September 1994, Miki took up residency at the renown Club Jaiss, which he helped launch, and Fridays at Torquemada in Florence. With Raulo Giovannoni he kicked off The West, the legendary Indian Reserve party that confirmed his musical career as DJ. In 1995 he played in Japan and Indochina and his sound, labelled him as one of the most hypnotic deep tech European DJ. The period from 1995-1999 sees him on the turntables at Exogroove, the launch of Taotec club, regular guest DJ at Amnesia in Ibiza and played at raves in France, Switzerland, Germany and the UK especially with The Clueless System.In 1999 he set up Sun Generation Records, a label that releases music on vinyl and groups together a pool of DJs, musicians and artists from different countries.After years of productions for other labels like DBX with many successful records and Interactive Test in Florence, Miki started dishing out vinyl productions of Techno, Deep-Trance, Experimental and Electronica in synergy with jazz and house musicians he met during his time in Satellite, on the top floor of Jaiss, where he rediscovered Underground DJ-sets. He took Satellite to other locations in Italy and in France. Those years were entirely dedicated to the Underground scene with rare appearances at important clubs like D!Club in Switzerland, Goa in Rome, in the US and in France where he reproduced Satellite in Paris. 2005-2011 he played at Club Frau (Torre del Lago -LU) as regular guest, where Miki rediscovered the taste for club nights and club music. Thanks to the sound expressed he was also Guest at other important venues throughout Italy, continuing to regale the crowds with great sets and vibes, sharing his contagious passion for clubbing and his unique style, his DJing in constant evolution. In 2009 the record label Audio Esperanto released Miki the Dolphin Allow My Future, a cult track for many and in the same year with the new Sun Generation Digital the record Miki the Dolphin- Sigillum, created in collaboration with Sonartek. In 2011 with a big refresh in the label Sun Generation Records leads him to share totally his concept of modern electronic music, in particular producing new talents and some important producers helping the label grow to higher levels with quality music. From 2007-2011 Party In Chianti his own event with friend Manuel Fabbri, parties where many different Djs from Italy and abroad are invited to share their passion for music, creating a periodical Tuscan event that still takes place in different magical venues on the Tuscan hills. In 2010 he started Club 999 of Max Innocenti near Florence, today one of the most important 'underground clubs' in italy where he is a regular guest.