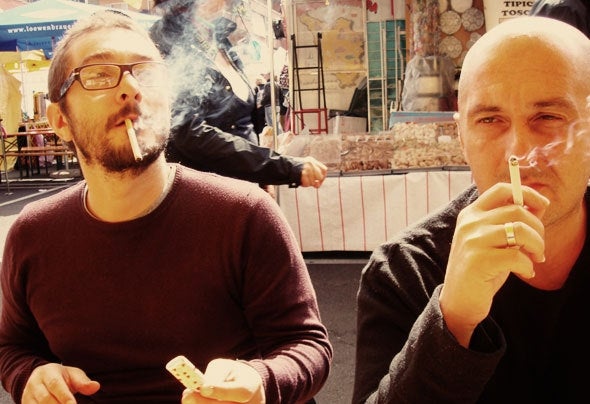 Collectively, the Piatto brother's knowledge and contribution to the history of Dance Music runs deep. Davide being co founder of N.O.I.A one of Italy's first electronic live acts to perform and record with drum machines and synthesizers as early as 1978. It is not surprising then that for Alessandro, following in his brothers footsteps was inevitable and he too became hooked on the incredible new sound palette emanating from the early electronic machines.During the 80's the Piatto brother's continued to push boundaries in what was then the very infant stages of Dance music with Davide recording tapes, later to be released by Mario Boncaldo and Tony Carrasco going under the name Klein + M.B.O with releases such as “Dirty Talk” considered to be the first Chicago House Record. During this Time Alessandro grew in confidence as a producer and also taught himself to mix adding DJ skills to his repertoire. Eventually at the beginning of the 90's, Davide and Alessandro joined forces to work on a new N.O.I.A. album for the US label Ersatz Audio which was quickly followed by collaborations with G.D. Luxxe as "Raymond Barry" and released the single "TV Night” which was included in Pete Tong's BBC playlist and Ivan Smugghe's compilation called "Death Disco".Piatto have delivered one sleek sounding sample collection for all producers worldwide looking add a pinch of Classic Italian design into their Techno and Tech productions. Since 2005 Davide and Alessandro have formed two of the biggest Italian Labels, namely Italo Business and N.O.I.A Records and have released on many labels such as Toolroom, 1605, 303Lovers, Italo Business, Respekt Records, Stereo Seven, Echoes Records. Piatto's passion for music remains the same today as it did in the beginning, with many Beatport top 10's under their belt they certainly show no sign of slowing down.