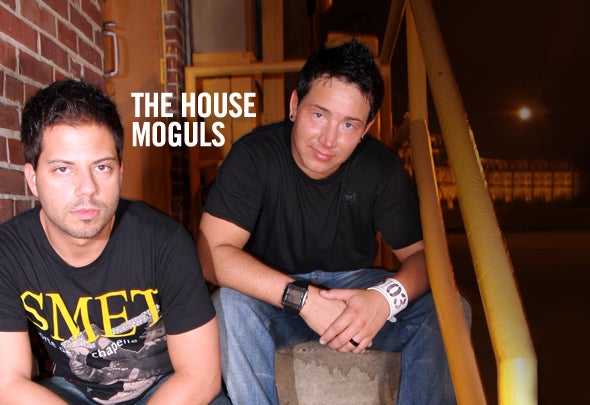 The House Moguls began in 2004 as a tag team of two producers who in their respective individual careers have accomplished more in 12 years than most DJ/producers do in a life time. The House Moguls are comprised of Gus Calderone (also known as GusEGruv) and Bill Basil (also known as Billy The Kid). Gus Calderone is not only one half of the musical genius that is The House Moguls; he is also the co-owner of Funktion Recordings and the driving force behind the business aspects of both entities. Gus Calderone began his career as many young artists do, playing house parties. However, he quickly broke into the House music scene in Chicago, reputably known as the origin of House music and one of the toughest markets to break. Gus Calderone brings many things to the table. One prominent feature is the knowledge he gained while attending the world renowned music school Full Sail in Florida. After completing his degree, he returned to Chicago ready to take the House music scene by storm. The other component to the ever growing talent that is The House Moguls is Bill Basil. He is currently one of the most respected and sought after talents from Chicago. Bill Basil’s biography ranges from being a Mixmaster for multiple radio shows, to spinning live at large venues and events all over the world with audiences of 50,000 +. Bill Basil not only has longstanding residences at all of Chicago’s major hotspots including Soundbar, Y Bar, and Level nightclubs; he also has maintained a spot as a Mixmaster on WBBM FM B96.3 for seven years. Currently he is a contributor to one of the most listened to mix shows in North America. It is apparent that after all of the years of hard work and dedication, others are taking notice of Bill Basil’s talent. He has represented Chicago as a nominee for both Emerging Artist of the Year 2006 and DJ of the Year 2004 & 2005 by Scion and Local Sound Chicago. Though Gus Calderone and Bill Basil are both individually strong, together as The House Moguls, this dynamic duo is a force that is to be reckoned with. In four short years, The House Moguls already have a variety of successes under their belt. Their first release titled “Universal Sound” EP was released under System Recordings and was co-wrote and co-produced with Josh The Funky 1. This track quickly became a club favorite and was played by DJ’s all over the world. There are an assortment of record labels supporting tracks produced by this collaborative pair including: Dim Mak (US / Steve Aoki) Dumb (Sweden), Eden (Donald Glaude) Gung Ho Records (UK), Nervous (US/), PBR Recordings (US/Canada), Play Digital (US/Canada), Pure Funk Records (Spain), S & S Records (US/Canada), Session/Global (Switzerland), System Recordings (US/Canada), and their label Funktion Recordings(US/Canada). The House Moguls pride themselves on targeting a world market by working hard in the studio on not only many American labels but European labels as well. Early in 2007, the duo began working with the lyrical prodigy MC Flipside from Toronto, Canada. The threesome went on to craft a remix of Kurd Maverick’s “The Rub”. This track exploded from the beginning and went on to reach #4 on Canada’s “Z 103.5’s Most Requested Chart” alongside major heavy hitters in the music industry Gwen Stefani (3) and Akon (5). Two other tracks on their list of accomplishments are their bootlegs of Daft Punk “One More Time” and Basement Jaxx “Rendez Vu”. Both are still receiving kudos from the likes of music reviewers, and other DJ’s and producers associated with on air personalities such as DJ Armando from XM Radio BPM 81. Both Bootlegs are gaining spins everyday and have received world wide support from the likes of Roger Sanchez, Erick Morillo, Bad Boy Bill, Felix Da Housecat, MSTRKRFT, LA Riots, DJ Dan, Donald Glaude, DJ Antonie, and Stonebridge. In addition to their Bootlegs, The House Moguls have legally remixed Deadmau5, Kanye West, and Common & JV. They are currently sitting on a remix of the creator of “This Time” DJ Antonie’s “All We Need”. The House Moguls creations are being displayed on large radio markets as well, including XM Radio’s BPM 81, AOL Radio, Kiss FM UK, Radio 1 UK, and Sirius Satellite Radio. The House Moguls can add their large fan following to the list of accomplishments. They receive endless support from not only the Chicago faithful, but those in Miami, New York, Las Vegas, and Los Angeles that are craving that distinct Chicago House sound that has been created and made unique by this unstoppable twosome. This team has a diverse group of supporters overseas, and has received support from major DJ’s in the industry both old and new such as Eddie Halliwell, Mark Knight, Noir, Pete Tong, Laidback Luke, Dumb Dan, Steve Aoki, Kid Massive, Fergie, Lasarro Casanova, Eric Prydz, Twocker, Antoine Clamaran, Jamie Fanatic, Asle Bejorn, Peter Gelderblom, Granite Phunk, John Aquaviva, Judge Jules, and Max Graham. These DJ’s and many others have included masterpieces from The House Moguls in many mix compilations such as System, Ministry of Sound, Cream Fields, Funky House Anthems, and Ibiza Summer House Mix. With the feeling of industry success and achievement at their fingertips, this vigorous two of a kind partnership has just started to unleash their creativity. With no plans to slow down, they are taking the House music scene and bringing it to a whole new level with North American and European Tours that are in the works. With endless hours in the studio pumping out hits, it is no wonder why these two have been described as the closest thing in the States to pushing out bangers similar to that of the Europeans (DJ Suraci & DJ Armando interview on XM Radio). Thus proving that The House Moguls truly are revolutionizing what it means to be Chicago House Music.