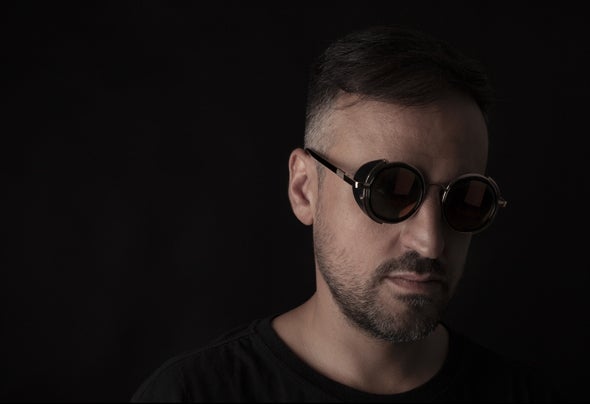 Born in a small town near Barcelona, George Privatti begins to experience his rst feelings to electronic rhythms at age of 17. Buying a bit later his rst decks, and strongly inuenced by the environment of the 90s’ illegal raves in the Catalan scene, soon he began to join and to participate in the world of illegal parties of his region. The success it does not go unnoticed, soon takes the step to head a list of important “new comers” artists of the national scene, getting to rub shoulders with the best participants of the international scene. 2009 was a crucial moment of his career, deciding to start in the production world, spending days and days in the studio to translate his ideas on his own productions, following the same techy line, alternating fresh and dance elements of the house with the forcefulness and bass lines most typical bass lines of techno. With an admirable sound evolution and an dynamism applied to its sets, during 2012 year he decided to create his own label, La Pera Records. The musical adventures of Privatti continue with rm step, with his signing for the family of the emblematic ElRow of Barcelona and his residences and parties around the world, playing in clubs like Privilege Ibiza, Space Ibiza, Amnesia, Fabrik (Madrid), Florida 135 and performing at festivals such as Tomorrowland, Park Life (Manchester), Monegros Desert Festival, Dreambeach, LoveBox (London), 18Hrs Festival (Amsterdam), etc., and touring more than 25 countries that have also been faithful witnesses of its quality and versatility in the cabin. The success of Privatti at the time of locking himself in the studio has not been overlooked within the sector; Elrow Music, 100% Pure, 1605, Toolroom, have been just some of the laudable ones that have trusted in their productions. In 2018 he get to reach the top of the beatport top of all genres with the theme “What a Bam” in collaboration with his great friend Guille Placencia and released on his own label La Pera Records.