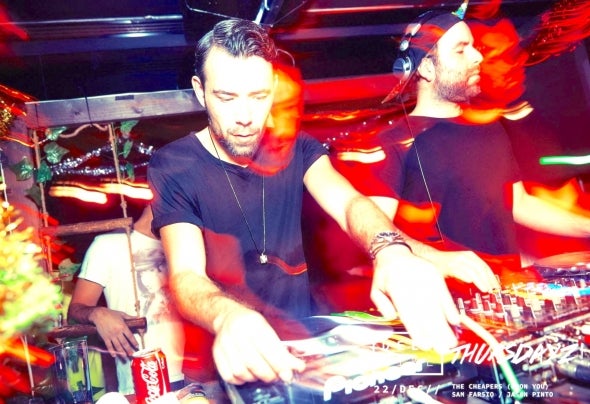 THE CHEAPERS Residency: KaterblauFraenzen and Ruede know each other since their childhood.First butt behind the youth club, first collective alcohol intoxication and the song of the young girls quasi is sung in a choir.Both come from the Berlin commuter belt, although Fraenzen is more to be seen as an native Berlin boy, due to the fact that he grew up two meters behind the city boundaries. Well, the provincial note of their adolescent surroundings can't be denied in either of their biographies. In the end both flee to Berlin central, to search and find their luck in the post wall-breaking metropolis. They party in Ostgut and live their dream of the big city. Reciprocative they search and found jobs in agencies and magazines. Finally Fraenzen worked for Groove Magazin, while Ruede focuses on acoustic engineering in the SAE School.The common hobby to mix records and to produce music finds its form with the project The Cheapers. While Ruede parallel makes dough as a solo artist, the corporate music making and djing intensifies and leads to a shared studio and a dj residency in the Berlin Watergate Club. The fun becomes serious and seriousness leads to records on Upon You, Bar25, KaterMukke and Areal Records.No seriousness whatsoever in the studio. The two flying dutchmen like to burn one down on the ride, play Playstation in the breaks and finally it results in tracks that barely fit in any patterns, actually deserving their own section on Beatport. A little Dadaism hasn't hurt any dance floor yet and we'll be thrilled to see which joker will be driven across the court-yard for their planned album.