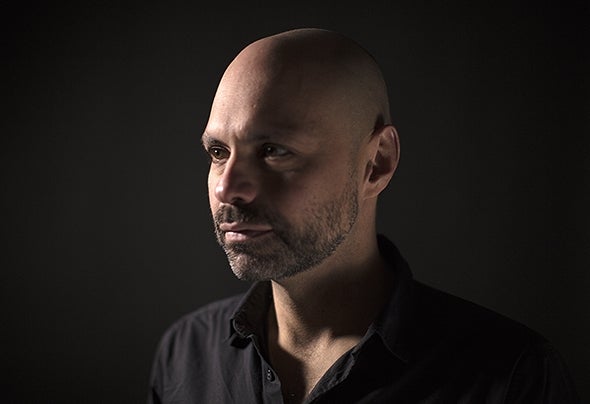 There are not many electronic activists who has been on the scene for 24 years and still set trends. Asem Shama is one of them. Since the beginning of the 90’s he can be considered as one of the pioneers of electronic music in Germany. Having his roots in Hip Hop, being a renowned rapper.In the 80’s, he made his rst experimental steps into producing electronic beats at his friend’s studio. There he found his new musical home and a place where he could develop his creativity in unlimited spheres.Next to his approaches as a techno producer he was the inventor of the legendary Ravesyndrome events.In this time he also build up his own studio and launched his rst label “Syndrome Audio” with his longtime companion – Axel Bartsch on which he released 15 vinyls until 1994. In the following years he established himself as one of the key players in techno music, releasing vinyl on labels like Bush, Planet of Drums, Frisbee Tracks, Utils and Spiel-Zeug,making him an underground legend in the German techno scene. His breakthrough came withthe track “Flash”, that was recognized by the remains of the band “Queens” themselves and afterwards was promoted as an o cial remix. He hit Top 20 charts across Europe, marking 15th position in the UK and 17th in Germany. With this major recognition he still continued to concentrate on the underground and was not giving up his upfront emphatic style of producing and mixing. His reputation as a DJ grew constantly, making him play all over the world and getting world wide reputation.In 2013 Asem releases his 1st Artist Album„MNDCTRL“ which marks a new meridian in his production skills and musical variety. One year laster he even comes up with his second Album “Chaos Theory” on London based Label “Minimal Force”.Recently, Asem dramatically increases his output resulting in a release Oliver Koletzki`s Label “Stil Vor Talent”, a release on Maxim Dark`s label Dense Audio and the Relaunch of Sportclub with a brandnew Vanguard release.