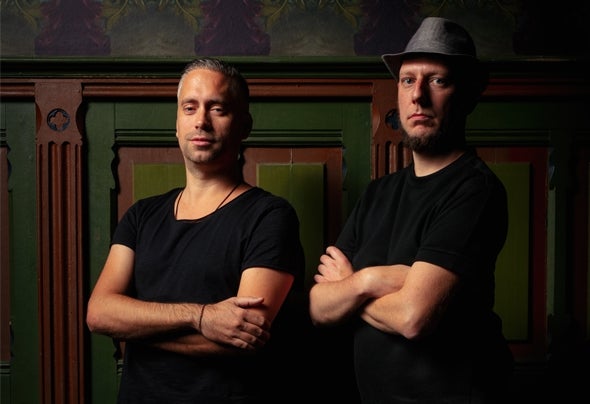 KAMARA ARE A DUTCH MELODIC TECHNO LIVE-ACT From their rst forays into making music under various guises, Kamara were formed in 2010 and have been steadily building their way up through the echelons of the electronic underground. This past year the guys have unleashed material on A-list labels such Tronic Music, Sudbeat, Bush, Voltage Musique Records, BluFin, Agile Records, Natura Viva and Proton, picking up remixes along the way from legendary artists such as Carl Cox, Oliver Lieb, Tom Hades, Daniel Nitsch / The Glitz. Of course records on these kinds of labels don’t go unnoticed. Their material has been played and championed by a wide range of their peer artists such as Nicole Moudaber, Christian Smith, Sian, Sasha, Technasia and Laurent Garnier, proving that labels and DJ’s alike are buying into the Kamara sound. Their sound palette is wide ranging within the techno sphere. From heavy repetitive techno with ethnic undertones, to a more melodic yet driving tech house sound, their musical path comes from the inspiration they get from the many different musical cultures they incorporate into their tracks. These worldly inuences are distinctively heard in their sets, which are underpinned by the universal sound of electronic music. And because life isn’t all about making and playing music Kamara also invest a lot of time into their successful party Metamorphosa. This party create a space where the musical identity of Kamara gets a wider exposure and it offers a great opportunity to collaborate and perform with other artists. Kamara have put themselves on a fast track to success with the right balance of hard work and talent. With more material getting interest from established labels, and the foundations they have already put down at Tronic, Bush and Sudbeat, you know Kamara are an act you will be hearing a lot more from.