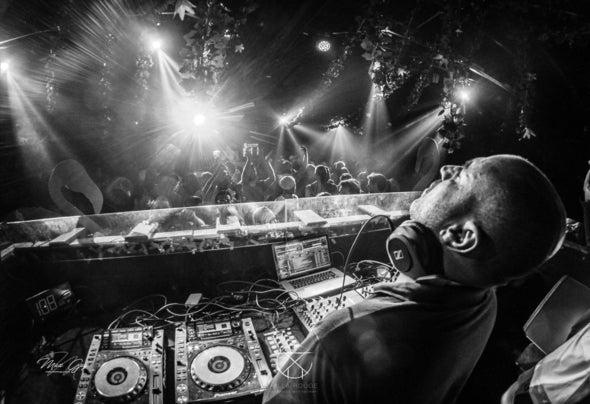 Born in Montpellier, Tom Pooks started his musical trip in the middle of the 90's, based in South of France. From raves to festivals and clubs residencies, he became an important local figure, in the region of Montpellier, one of the biggest electronic cities in France. When the DJ started being curious about production, it's along with Joy Kitikonti that he learnt working on his computer. From then, his first productions got released on labels as Scandium, Eukahouse and Serial Records, in a quiet tech-house style. But his DJ's opportunities getting bigger and bigger, Pooks progressively turned into more mentalistic and groovy techno. Regularly playing with Richie Hawtin, Carl Cox and Josh Wink, to name a few, he found a new way of producing and his tracks got signed to more prestigious labels, like Ovum, Intec and Kompakt. These labels definitely gave him an international status, allowing him to play everywhere, from South America to Russia and across Europe. At this time, Pooks was a regular guest at Space Ibiza, where he played several times next to Carl Cox. In 2011, he mixed the official compilation for Ukrainian's giant Kazantip festival in 2011 but he suffered a very bad moto accident that same year. It stopped his DJ career, taking him away from touring during more than one year. Laid on his hospital bed, he decided to created his own festival, FAMILY PIKNIK, in Montpellier. Since 2012, year after year, its unique concept in France has been widely known, seducing world class artists like Solomun, Sven Väth, Marco Carola, Maceo Plex, Richie Hawtin, Luciano, Âme, Joseph Capriati, Fritz Kalkbrenner, Loco Dice, Hot Since 82, Josh Wink, Miss Kittin and many others... In July 2018, Tom Pooks launched Family Piknik Music, his brand new label.