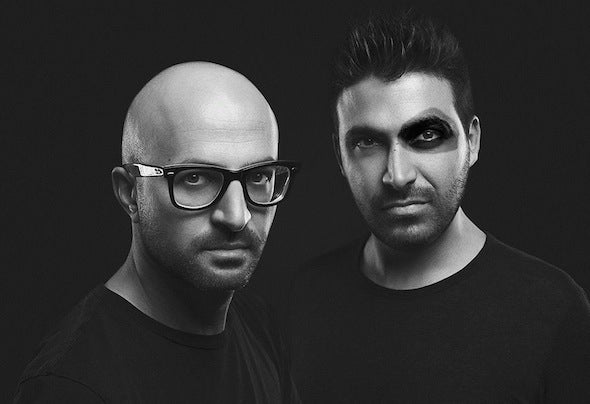 Tommy Paone & Marko Kay are the Neverdogs...These two artists started to play separately back in the nineties and met each other in Florence in the year 2000 where the Neverdogs project was born. Breaking into the electronic/dance circuit in 2004, with musicians Alessio Monizza and Davide Ruberto, this Italian duo continued to build reputation asboth DJ’s and producers.Catapulted into the limelight during the summer of 2005 via a collaborative project with Italy’s most sought after event, the DocShow (a decadent mix of music, art & performance) the Neverdogs were suddenly on everyone’s radar. 2006 saw them relocate to Ibiza during the summer months where the first of many residencies and regular appearances began at Ibiza Institutions Privilege,Space, Z oo Project & Underground.In 2009, their already expanding Ibiza status exploded with the launch of the most exclusive Katamaran parties; Hosted by Sexy’n’Chic, guests including Villalobos, Jose De Divina, System of Survival and a host of others joined Marko & Tommy for a musical voyage, now known as one of the islands not-so-best-kept secrets.Now renowned in the underground and influential industry circles, their dynamic sound is sought after by the most selective gatherings in Italy, Ibiza, London, Miami, Punta del Este and beyond. Regularly headlining the globes finest establishments and parties, playing alongside various artists such as: Locodice, Behrouz, Tania Vulcano, Dan Ghenacia, Shonky, Audiofly, Luna City Express, Lucio Aquilina.Back in London for the winter months, they soon established regular appearances at two of the Capitals coolest parties, Retox (RIP!) & Follow Me, the latter of which they still play at today, along with its sister event, the elite and super secret ‘costume’ parties...Keeping their first material to themselves and shared with select few DJ's, such as Steve Lawler, Pascal Feos, Satoshi Tomiie, many more became instant fans. Releasing their productions onto labels, with current material on Idea and Eukatech Records, their music is featured in Richie Hawtin, Timo Maas and Bushwacha!’s playlist’s. Releasing “Deep like you” on Digital Traffik and “Still in my town” on Pleiadians records.Following a winter tour in 2011/2012 of South America and many other exquisite events back in Europe, Tommy & Marko recently played alongside Craig Richards at Tenax (Italy) and at Move On Festival in Uruguay. The summer season of 2012 saw them play at “Music On” the new party hosted by Marco Carola, being held at world famous Amnesia in Ibiza. They were also resident for the “Senses” party hosted by SexynChic at Ushuaia (Ibiza).They have several new tracks that will be released over the coming months: - "Dauphiness World" that will be released on Nitegrooves (Kerri Chandler's record label).- The remix of "Hummor" by DJ Dep on Black Flag Records (Stacey Pullen's recordlabel).Plus they will also release three new EPs : - "Seven Days" on vinyl and digital, on Oblack Label (Including a remix from Psykoloco). - "Too Far Away" on Decay records (Includind Xpress2 and Cozzy D remix). - "Nucleus" on IUM records.With a calendar full of international gigs and their winter residency at Vanilla Ninja in Moscow, DocShow in Bologna and Egg London, 2013 is shaping up to be their biggest year yet, which has already seen them play at MIAMI WINTER MUSIC CONFERENCE with Music On at Nikki Beach. Having also played at various private parties over the last few months, such as Naomi Campbell's partner's birthday in Jodhpur, India, they have since been playing alongside, Diana Ross, Jamiroquai, Billy Idol and Brian Ferry to name a few.Their summer season will start with them playing at the opening party for Music On at Amnesia, Ibiza, where they will be also resident throughout the summer and with many more events still in the pipeline, 2013 looks set to be another incredible year!