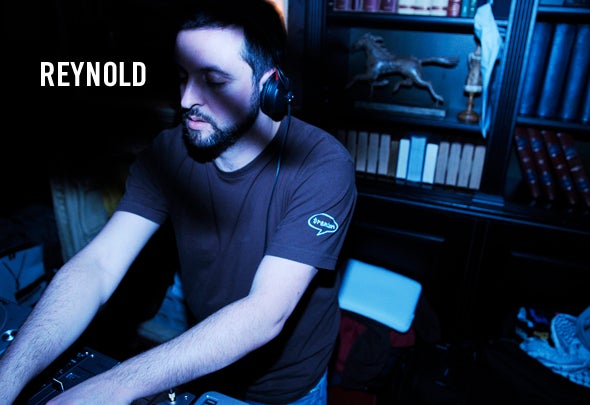 Sam Rouanet started playing violin and classical guitar at a conservatory at the age of 6. But a few years later he chose the electric guitar and started jamming with his father (who's an excellent jazz musician�) Despite early exposure to jazz through his dad and growing up with soul music, by the 90's Sam developed a keen interest in the independent rock scene (bands like "Fugazi", "No means no" or "Helmet"�). Even back then experimenting with new sounds was mainly what he was aiming for! Hip hop was also a big step for Sam - especially in terms of production� the need to produce his own music became increasingly more important to him� especially after having met Matt Lux (the bass player from Isotope 217�). Sam then moved to Chicago and got inspiration from the house and "post rock" scenes (which at the time wasn't even called that way but how else would anyone label Tortoise's music, anyway?) And so Matt and Sam formed a funk band called A.U.F.M and started playing in the Chicago local scene! Sam then moved to London and his collaboration there with Kinobee and Scanone led him to concentrating on his own production work. Back in France he met Phil Stumpf and so it was only after a couple of European tours with the band �OH.� that the Canvas / Duplex100 and Minimal Dancin' adventures got started! His solo project - Reynold - also began developing around that time. After signing several 12� on labels such as Morris-Audio citysport, Out of Orbit and Trenton he released a full Cd album on Stewart Walker�s imprint � Persona. He also started his own label called Trenton records in 2003 which is now becoming one of the most established underground electronic dance music platform in Europe with artists like 3 Channels & SLG, Nooncat, Touane, Till von Sein & Aera, P.toie, Theodor Zox, Der Thal and himself as Reynold of course� The new catalogue signed new artists like the Venezuelan Garnica, Giovanni Verga and Cosmic Cowboys from Italy and Elias Landberg from Sweden. Played already in the following cities and clubs: London: Fabric; Brussels: Fuse; Berlin: Watergate, Weekend, WMF, Arena; Frankfurt: Monza; Paris: Nouveau Casino, Pulp, Batofar, Tryptique; Moscow: Propaganda, Mix club, Shanti; Copenhagen: Rust, Culture box; Bologna: Cueva; Milan: Privat; Tokyo: Yellow, Womb, Colours studio; Osaka: Quop; Bilbao: Fever; Barcelona: Sonar; Mexico City; Kiev; Vilnius; Bergen; Florence; Naples, Olbia; Toulouse; Nantes; Rennes