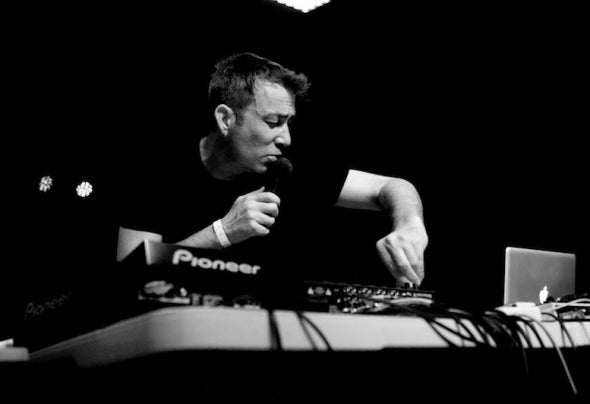 On Thursday, December 1st, 2005, San Francisco’s pioneering live sound system played their final live show at Cielo in New York City, concluding 16 years as recording artists, innovative live performers, and motivating catalysts for dance music as a forum for political dissent, subversion, and emotional and spiritual independence. Born from a love of dancing on the California beaches by firelight until dawn, since spring of 1991 Sunshine (the male) and Moonbeam (the female) Jones aka Dubtribe Sound System, literally took their idea of hooking up a few sequencers and ousting the dj from the party to the world. Initially packing everything they owned into a devastated Dodge van, they traveled around North America from San Francisco to New York City, Toronto to Miami, Whistler to San Diego and all points in between and around the world to France, Netherlands, the UK, Spain, and Germany - all in an attempt to incite change, restore faith and have a party at the same time. In that time, between establishing themselves as one of the American dance music scene’s most endearing and inspirational live shows, running their own imperial DUB Recordings label (now defunct), this husband-and-wife ‘tour de force’ has yielded fruit in the production of five full-length albums, a dj mix album, countless remixes, and a string of singles, including some of the deep house community’s most loved anthems of the past several years including “El Regalo de Amor’ for Guidance Recordings, Top 5 UK dance chart hit “Equitoreal”, and the international smash “Do It Now”. Following the international and US releases of their last album Baggage on Defected (2004) and imperial DUB (2005) respectively, Dubtribe Sound System decided to call it quits, citing the increasing demands of parenthood and some sense of loss at the end of the house music movement that had moved them from 1989 until that moment. But not before the duo embarked, along with percussionist Michael Sultan, on a year-long ‘farewell tour’ to properly say ‘goodbye’ to the friends and family they’ve made over the years. Once more, then no mas… Then, after a farewell performance at the legendary Simon’s in Gainesville, Florida in October, a funny thing happened on the way home from the disco… Following an awe-inspiring night of reunion, revival and farewell where Dubtribe Sound System said goodbye in the very best possible way to their friends and family in Florida – a long-time hotbed of support for them – for the first time in a good while, “I left the club inspired, (my) head full of music, and ready to work,” explains Sunshine. Full of inspiration, yet feeling the emotional gravity of Dubtribe’s life span coming to an end, Sunshine returned to San Francisco revived, energized and excited about the (re)connection made with house music that weekend. He set about locking himself in his studio and resolved to write, produce, and mix a track each day for a week, turning the task into creative motivation, coming to grips with finality of Dubtribe’s demise, the resurrection of his faith in house music as a positive force, and the emergence of Sunshine Jones as a solo artist and producer in his own right, beyond the confines and comfort of Dubtribe Sound System. “(At points during the week) I asked myself, what's the point? I realize it's tragic to witness the mighty Sunshine T. Jones collapse with lack of faith in the music, but I tell you...if this process and suffering I've put myself through is anything, it is quite natural,” reveals Sunshine. “Let it stand for all those who lose their way; I'll be holding the torch for you. Convinced that I can not drop this, and with no wish to exit (myself) I am resolved and resigned to put this inspiration to good use.” The final result is Seven Tracks in Seven Days, one man’s love letter to the raw, stripped down, yet emotional music that captured a generation’s heart, mind, and soul. Inspired by the likes of Chicago house music legends Frankie Knuckles, Marshall Jefferson, Robert Owens, Mr. Fingers, and Ron Hardy, Seven Tracks… shows a rarely seen ‘electronic’ side of Sunshine Jones, one hidden by years of Dubtribe’s lusher, more organic productions.