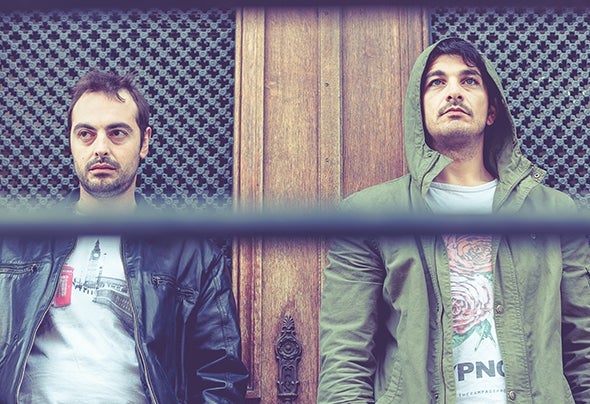 9west is a project of Tikis and George who both live in Thessaloniki /Greece. They work as aDj and/or producers since 1998.The structure of a 9west set varies from house and techno to dub and/or electronica. Tikis and George have published their tracks and mixes at labels like Dessous Recordings, Liebe*Detail,Nite Grooves, King Street Sound,MUSIK GEWINNT FREUNDE, Back & Forth and many others.Both love the deeper side of music with many jazz and soul elements, but every time raw and kicking. Their music is free of crippling nostalgia and rather wins you over with consistency, tension, and dynamics and time and time again with a sensibility, one would usually expect from house music. In this vein, 9west pursues an unexacting fusion of quantum jumps and tradition – including effortless melodies or hook lines.'09'10'11 was a successful years because 9west published some nice records. Kollektive Turmstrasse gave them the chance in MUSIK GEWINNT FREUNDE with the track ''HIDDEN ENERGY'' on vinyl ep as well Steve Bug trust them to deliver their sound ''SHAPES EP & VELVET'' EP on Dessous. Next step was ''REDEMPTION'' EP on LIEBE DETAIL and after all their music travel to New York with the latest vinyl for 2012 ''WHATS ON YOUR MIND'' EP on NITE GROOVE.9West they got great reactions in more than 10 compilations with great artists such Shlomy Aber, The Hacker, Kink, Adam port,Daniel Stefanik, Nils Nuenberg, Florian Kruze, Phonique, Lovebirds, Vincenzo, Tigerskin,Steve Bug, Trentemoller, Jimpster,Gorge,Alex Niggemann, Radio Slave, Deetron,David August, Stimming etc.9west production is based on vintage instruments like original drumsets and live played perc, slap basses, organs, strings, blend with electronic cords, leads, sounds and effects and atmospheric pads. Their music can be described as deep-house and tech-house enriched with the distinctive mood of the analogue warmth. Very quickly the songs of 9west entered on top charts of deep house music.Throughout their Djing career, 9west had made several appearances all over Greece, as well as abroad: Berlin, Paris, Frankfurt, Budapest, Rome, Ohrid ,Mexico city ,Guadalajara.