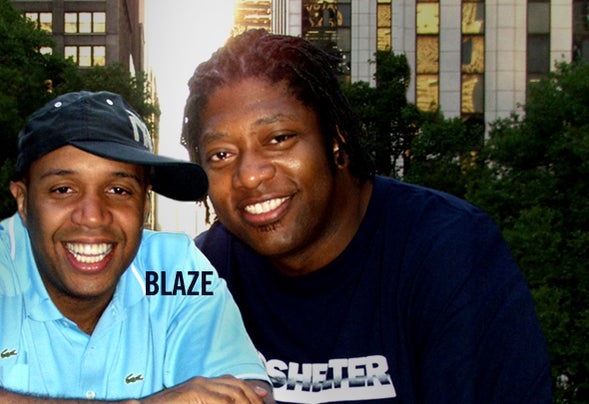 Blaze is comprised of singer/songwriter Josh Milan and songwriter/producer/engineer/DJ Kevin Hedge. The songwriting/production team has been recording dance-oriented music for over 20 years, and is considered by many of dance music’s elite to be pioneers in the soulful house genre. In 2005, Blaze wrote and produced the international hit "Most Precious Love" feat. Barbara Tucker, which landed them the U.K. House Music Awards “Song Of The Year” and shot up to a NO.1 position on Billboard’s Hot Dance Club Play Chart. It appears 2007 will be another stellar year for Blaze, having been commissioned by Sony BMG with the latest hot remixes of Beyonce’s “Listen” and Jennifer Hudson’s “Family,” from the Academy Award nominated film “Dreamgirls,” both of which have reached anthem status amongst both dance floors and elite DJs around the globe. Their most recent creation, a song entitled “One Dream,” was picked as the performance song for Cirque Du Soleil and performed by Louie Vega & The Elements Of Life Orchestra in front of millions of viewers around the world during the opening performances at Super Bowl XLI in February of 2007. DJ KEVIN HEDGE Biography Industry veteran Kevin Hedge, one half of the group Blaze, has enjoyed equal amounts of success in the music industry as both a musician and a businessman. In 1991, he opened up Club Shelter with superstar DJ Timmy Regisford. Club Shelter has since made history in the international club scene and acted to fill the void left by the closing of Paradise Garage. In 2001, Kevin Hedge joined forces with Mel Cheren and became part owner and President of West End Records. From 2001 to early 2007, Hedge released an extensive collection of NYC soulful house titles on West End, including heavy-hitters like Junior Vasquez, Louie Vega, Kenny Dope, Danny Krivit, Danny Teneglia, DJ Marley Marl, Stephanie Cooke, etc. Kevin Hedge and Grammy Award winner Louie Vega have just celebrated the 3rd anniversary of their highly successful NYC weekly party “Roots”. As resident DJ, Hedge continues to entertain audiences around the world with his mix of House, Funk, Soul, Hip-Hop and Jazz. "My greatest joy,” Kevin says, “ is to add value to the Universe." Kevin Hedge continues his entrepreneurial endeavors with the launch of his newest label, Blaze Imprints. The Blaze Imprints brand will be dedicated to releasing new music from Blaze, along with soulful dance music hits from the industries leading producers and DJs. With upcoming releases from Blaze, Japan’s beloved DJ Gomi, and the legendary DJ Marley Marl, Blaze Imprints is already on the fast track to success.