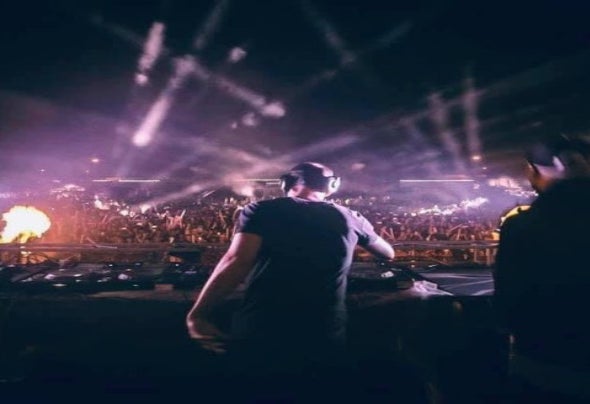 With roots that extend deep into the rich history of UK club culture, internationally acclaimed Marc Vedo is one of the most established names to come out of the UK music industry. With a long and distinguished career as one of the nation’s biggest DJ exports, Marc is also a prolific music producer releasing a string of chart breaking dance-floor anthems, as well as owner of Koolwaters; a legendary UK & worldwide party brand, label and booking agency. Since embarking on his journey into the music industry aged just 17, Marc has been at the forefront of electronic music. From a very young age all the major music publications from Mixmag to DJ Magazine proclaimed Marc as one of the future stars of the electronic music scene and over the years he has been fulfilling this promise with multiple landmark achievements. With his talent scouted early by many of the UK’s iconic club brands, earning him residency slots at clubs and festival appearances the length and breadth of the UK, this wave of attention quickly caught the eye of UK institution, Ministry of Sound, making him one of their international residents in the mid 2000’s taking him across the world to far flung places in Africa to South America and beyond. His love and sense of style and fashion hasn’t gone unnoticed by many of the world’s leading fashion houses and brands, Marc has travelled the globe to play at corporate events for the likes of Hugo Boss, Ralph Lauren, Sony, Google and Armani. Marc Vedo dived into studio production early on in his career with his first releases being signed to Ministry of Sound and Hed Kandi, a journey which over the course of the years has lead him to become one of best selling house artists on the Beatport and Traxsource platforms. Breaking into more commercial territory in 2017, Marc Vedo signed his first worldwide deal with major label Sony music and his single release ‘Ride Of Your Life’ with Kung’s ‘This Girl’ vocalist Kylie Auldist, hit over 6 million views on YouTube. The track marked the arrival of Marc Vedo as a mainstay producer and he went on to sign subsequent deals with Spinnin’ Records, Armada Music, Toolroom Recordings, Love and Other and his latest multi track deal with Perfect Havoc, joining one of the UK’s hottest imprints alongside the likes of Joel Corey, MNEK and PS1. He has remixed everyone from George Michael to Boy George, collaborating on multiple tracks with the latter and even creating a joint label with Boy George called VG records (Vedo/George), further enhancing his reputation as a prolific producer. Marc Vedo has managed to continue to bridge the fine balance between commercial and radio appeal whilst remaining true to his club roots and UK underground influences. This has seen huge support across the musical spectrum with superstars like Calvin Harris, David Guetta, Don Diablo, Martin Solveig playing his music, as well as underground titans like Marco Corola, Sasha, Pete Tong, Roger Sanchez, Gorgon City, and Steve Lawler. With his never-ending passion for music and multi faceted talent and involvement within the industry, Marc Vedo continues to innovate throughout 2021. With 5 million plays on Spotify, 8 Million plays across Soundcloud and Youtube combined, 17 Top 100 singles on Beatport, ranked in Top 100 Best selling House artists on Traxsource, the legacy Marc Vedo has created on his journey so far and his dedication show there are no limits to what he will achieve in the future.