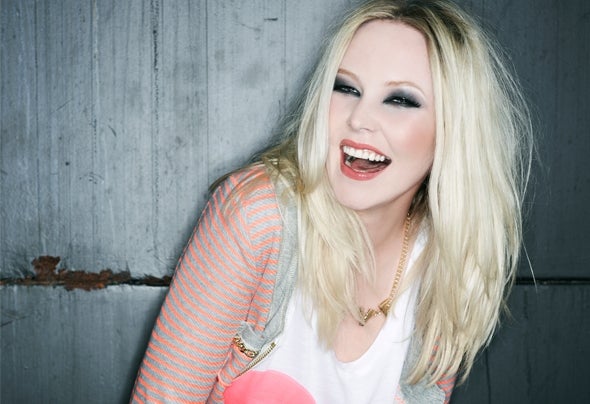 Hannas success story comes in two: she is not only the face of Jules Mumm print and TV campaignand (runway) model for acclaimed designers like Escada and Hugo Boss but rather famous for her remarkable rise as an internationally respected DJane.Supported by major DJ acts and booked for the hottest clubs all over the world, Hanna Hansen is the DJ business most wanted female who rocks party people everywhere with her catching vibes, her one of a kind grooves and a unique sound.Hannas first gig at the Loveparade 2007 set was the first milestone for her astonishing career. Today,she is working the turntables making the crowd go crazy with her characteristic beats.From Paris to Casablanca, from Dubai to Singapore from Vienna to New York – watch out for Hannas party sound! Not only as a model running at fashion shows in Paris, Berlin and Athens but also as a DJane she is booked in the model business – her performance as a DJane for Fashion TV and Fashionweeks all over the world proved both, her sexy looks and Hannas strong sound.Even though Hannas schedule is tight traveling around the world, spending hours in the studio is important quality time for her: this is where the remixes and productions come alive. The success of her studio work established Hannas name in the business and also added more flavor to D.O.N.Ss, Barbara Tuckers, Mobin Masters, Vincent Vegas, Daddy Grooves, Inusa Dawudas and Nicky Romeros singles.Hannas first singles “Free 4 Love” and “Let it Go” hit the scene right away and Deejane Angel D.s song “Nightflight” stayed at number 1 in the DJ Tunes Top 100 for weeks.Hannas single “Lovers” ( Top 10 British Dance Charts) which features Errol Reid as a vocalist is another prove that she will have her impact on this decades music. Vice Versa, notable DJs such as Laidback Luke, David Vendetta and DJ Chuckie are supporting Hanna by playing her sound: her productions are regulars of the radio show “Release Yourself” hosted by DJ legend Roger Sanchez. Hannas energy seems to be one of a kind: as a resident DJane, Hanna is playing her sound Friday evenings between 21:45-00:45 on BigFMs “Tronic Love”. The 1 hour set is just the beginning and makes her listeners craving for more. Creativity, passion and perfectionism pay off:Hannas sound is also an inherent part of various compilations e.g. Best of Pacha 2012, Pacha Summer 2009, Pacha Classics, Hed Kandi and Safari Musik Vol. 1 working with Labels such as Tiger Records, Pacha Recordings, Houseworks, Ministry of Sound, Spinnin Records and Skilled Records.Hanna Hansen is an all-rounder – but first and foremost, a DJane with heart and soul. Her sound and cool beats are intoxicating and make the crowd go crazy all around the globe – no matter if Hanna is in the studio, on air or live at the turntables.In 2012 was a year of success for Hanna and so she has co-mixed the official Pacha 2012 compilation and she also has released her „MAXIME“ & „PENELOPE“ - EP on Pacha Recordings.There ́s more to come...! Stay tuned!