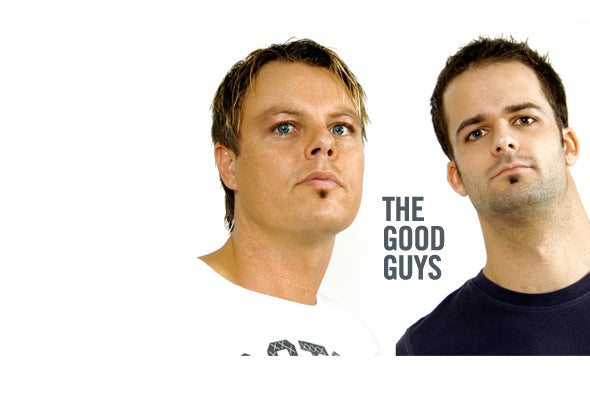 The Good Guys (Gfab Records, Housesession, Milk&Sugar, Kontor, Spinnin Rec.) The Good Guys teamed up in 2004 as a DJ- and Producerteam after knowing each other for over 10 years. Located in a tiny studio in Zurich (Switzerland), they’re producing tracks and remixes gaining interest of the tastemakers like Axwell, Erick Morillo, Shapeshifters, Kid Massive, Robbie Rivera, Stonebridge and lots more. And this is how it all started: Their first production called "Give Up The Funk" got released in 2005 on Elan Records (USA/NL) in collaboration with Ian Carey. It gained huge support by the likes of Axwell, Shapeshifters, Groove Junkies, Major Boys, Danny Marquez, The Beginerz to name a few and achieved different hype chartings and all over Europe. The follow up single "Lose Control" boosted The Good Guys on the next level not only by having regular plays by Erick Morillo and Pete Tong – it also has been suppoted by all the other big jocks such as Michael Gray, Stonebridge, Timmy Vegas, Kid Creme, Richard Earnshaw, Warren Clarke or Hardsoul. While getting licensed all over the world, from Australia to Spain, from Italy to Germany to the UK, it went into the Top40 charts in several countries. International tours came up in countries like Russia, Ukraine, Sweden, Spain, Austria, Germany and countless others. Meanwhile, The Good Guys have been producing many original tracks and remixed artists like Ian Carey, Thomas Gold, Avicii, Tune Brothers, Jorgensen, Filthy Rich, Major Boys, Pepper Mashay for various labels, reaching several Top10 chartings on Beatport and all over the world. Besides their studio work and the club tours, The Good Guys are mixing their own radioshow called "Funk Fabric" on various radio stations with international Guest-DJs. www.thegoodguys.ch