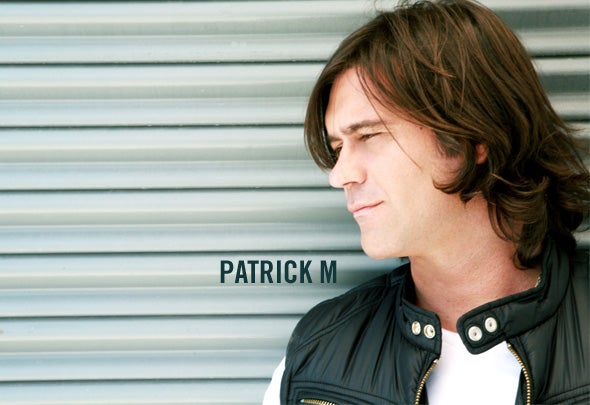 DJ PATRICK M. Now considered a regular in Miami’s weekly party circuit, Patrick M. is currently best known for perpetuating this city’s reputation in the contended world of dance music. His, is currently a marathon network of parties that each lead to the ultimate definition of ‘having a fantastic night out.’ Stocked with a full armoire of lounging-it-up- pass-me-a drink, or get-up-and-dance-like-nobody’s-watching kind of music, he has added a new meaning to the concept of spinning, making and selling records. Originally from Buenos Aires, Argentina, he led the way there for house music and dance DJ culture during the 1990's. His forward sound became his trademark serving up dance floors with his brand of twisted, deep, tribal house. As a DJ, he gained notoriety quickly at South American hotspots like Buenos Aires News, El Divino and Pacha's Clubland, where he played side by side with the likes of Global Underground superstars Hernan Cattaneo and Lee Burridge. Patrick M. was able to help pave the way for electronic music in Argentina and can be credited for lending a hand in putting this hometown on the global map of dance music. While continuing on this endeavor, he has performed at massive dance events in this country such as Creamfields in 2005, where he spun the turntables wild in front of over 45,000 enthusiasts. With bigger expectations and musical ambitions, Patrick M. set his eyes on South Florida in 2003. It wasn’t long before Miami Beach’s sandy shores and progressive club culture would call his name. Monthly bookings in Miami have ensured his success for years to come. Opportunity knocked even louder on South Beach as he joined up with Buenos Aires based music store Chopin Hagen in introducing their Miami concept Grooveman Music. The store serves as the primary supplier of dance music and dirty house in South Florida. His knowledge in music has led him to become the supplier of the "Miami Sound" to many of the DJs and producers that make this their home including Oscar G, Robbie Rivera and Cedric Gervais, among many others. Miami became the next phase in Patrick M's DJ and production career. Crobar, Mokai and Nikki Beach have all taken to his style in the past three years and made him a welcome resident in what the world knows as "club land." Angel Moraes, Behrouz, Pete Tong, Roger Sanchez, Yousef, Ralph Falcon, Steve Lawler and a special friendship with the likes of Danny Tenaglia and Erick Morillo has allowed him to ultimately team-up on the decks to deliver brutal blows to the masses around the world. Whether he’s taming the decks in his new residence at Club Space’s infamous patio, or setting the mood for bikini clad dancers Nikki Beach’s Amazing Sundays, Patrick M. redefines success through fantastically infectious parties every week. The latter has developed wicked deck alliances with DJs such as Austin Leeds, Axwell, Nic Fanciulli, Bob Sinclar and many more, being that this is Miami’s most fabulous party under the sun. Among Patrick M’s growing list of studio productions, “Late Monday” on Slush Recordings was released in 2005 when he joined forces with Ariel Baund with remixes by Olivier Berge. This late night dirty stumper has been setting off dance floors and rose to # 12 on The Balance Promotions Charts in March of that year. Under the duo’s moniker, ABPM, “Sweet Feelings” was released in 2006 on Behold Recordings. Behold 2007 with the advent of stellar studio productions alongside stellar acts, which are currently in the works. Stay tuned for more about Patrick's DJ gigs, tours and new release coming in the next few months. With Patrick M, there's no signs of stopping, no sign of slowing down at this point. As a DJ and producer, his message screams loud and clear to the people he's reached on the dance floor and in the industry " I'm HERE, LISTEN UP!" When you think of most stories ending, this ones just beginning for this superstar, making the world dance ‘till Late Monday!