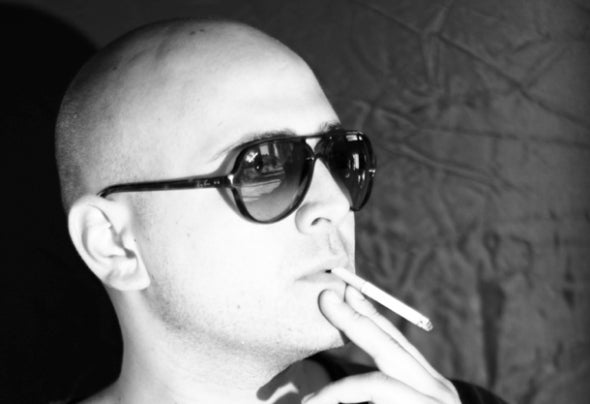 Michele Stentella aka "Miki Stentella" speaks well of his first and only love,music: “music has dug inside me sparked unexpected flows in my veins. I decided to abandon me to her, her only one. And it is she to whom I entrust all my dreams.Born in Rome on February 23, 1985, from an early age realized that music would fill his days. It begins, as all the young people who come to this world, playing free private parties of friends and saving up to buy two Technics 1210 , the dream consolle of his generation Dj.At the age of 19 he officially joined the world of the night, signing his first contract at the glorious Arabesk in the center of Italy.Driven by his strong passion for music, Dj emerging, is not satisfied and he flows in the nightlife of Rome City.In Rome, in fact, comes in contact with major event organizers, who do play as a guest for important evenings. Salt visibility, mature experience and passion turns into work.He was influenced by the music of the early and late 90 ', and many of his remakes and mash-ups thus suggest the Groove of the period, and twist by electro-house.Since 2010 he lands at the Disco Dinner Jasmine Nepi (VT), where in addition to the well-deserved place of resident DJ, get a real consecration of the public who now applauded and applauded loudly to each and every evening, enchanted by his refined musical selections fashionable and perfectly in sync with the trends in all the best clubs.After the winter season, continues with its Roman performances by guest and summer of 2011, obtaining a resident console at The Country Disco.Hot summers and rich rewards those just passed marked by its first Italian tour, concentrated in fifteen days, which led him to perform in famous clubs, in important cities like Gallipoli, Milan, Bologna, Rimini and Rome.His plans for the future certainly ambitious, but with the right amount of commitment and dedication are achievable. Will aim to achieve further success and satisfaction, especially in the console Jasmine Disco Dinner where is also the current 2012/13 season".We have to include, in addition console international repute in which he had the honor of being a guest star, as the PARADISE of Mikonos and T he CAPANNINA of Forte dei Marmi.He worked on the GILDA (RM), the PIPER (RM) and for several years has been resident DJ at 'ARABESK DISC (VT ). Continuing collaborated numerous times with the Boeme (RM), REVERSE (VT ), DIST ILLERIE CLANDEST INE (RM), FASHION BAR (RM), MASIPARERO (MO) ENJOY (VT ), ELIT E (T R), MY CLUB (RM) LA BUCA (MO), SKY BAR (RM), LE RUPI (VT ), WHIT E CLUB (RM). has recently modeled scenarios prestigious TOCQUEVILLE 13 (MI), SAMSARA BEACH (Gallipoli), Riobò (Gallipoli) and COUNT RY DISCOTEQUE (RM) in 'summer 2011. It 'resident deejay JASMINE DISCO DINNER (VT) Interested in 2010.As a producer Deejay At the start of 2012 he released his first single "THE NIGHT IS STRONG," a production AirMusic Wave, which for this project took advantage of the online distribution of the prestigious label Island Def Jam Records - Universal Music Group.Brand new productions of the artist are MORE under tight supervision of Kumusic and Kunique records, which is ranked 72nd in the rankings of Beatport and the latest single "SHOW ME" which stands over 50,000 views. The fan club face book and twitter grow dramatically in recent months to overcome the over 15,000 users.