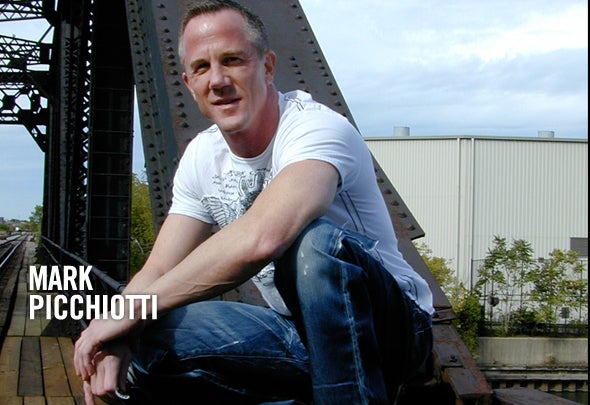 A DJ first, Mark cut his teeth at the legendary Stark Club (named after its designer, Phillipe Stark) in Dallas, before moving to Chicago and going on to DJ in the world's most respected clubs. From residencies at home (Shelter, Smart Bar, Soundbar, Berlin, Crobar) and abroad (historic UK club Hard Times) to globe-hopping gigs at venerable dance temples like Ministry Of Sound (UK), Pacha (the original, in Portugal), El Divino (Ibiza) and various Crobar clubs. His solid DJ reputation was highlighted with a request by Janet Jackson to DJ her Janet album launch party. Mark Picchiotti is one of the great American DJs still rocking the house. Literally. Flashing a discography of over 200 remixes, Mark Picchiotti has remixed all the top girls (Beyonce, Solange, Mariah, Madonna, Kylie) and boys (Enrique, Pet Shop, The Killers, AC/DC, New Order, Erasure, Jamiroquai). He was voted one of the Top 40 Most Influential Remixers Of All Time (Blues & Soul Magazine, UK) and counts many of the world's top DJs (Deep Dish, Danny Tenaglia, Peter Rauhofer, Seb Fontaine, Roger Sanchez) as fans. Mark's production career began back in 1991, when he produced the debut album for reclusive Chicago artist, LaTour, which spawned the controversial top 40 hit 'People Are Still Having Sex' (NBC's 'Nightline' even did an episode on it). The follow-up, 'Blue,' was used in the steamy nightclub scenes in the Sharon Stone movie, 'Basic Instinct.' http://www.youtube.com/watch?v=lebR4IgOaxI Since then, Mark has moved deftly between pop and club tracks. In 1995 he released 'Love Breakdown' by Streetlife featuring Dana Divine on Tribal America. It was quickly followed by 'There Will Come A Day' by The Absolute featuring Suzanne Palmer (also on Tribal). BBC Radio 1's Pete Tong, host of the #1 dance music show on the planet, named it his 'Essential New Tune' for an unheard of four consecutive weeks, bringing Mark Picchiotti worldwide attention. The subsequent 'I Believe' single, on AM:PM (UK), was again championed by Pete Tong and earned Mark the mantle 'Godfather Of Gospel House' in the UK DJ magazines and props for single-handedly kicking a once lumbering genre of dance music to the next level http://www.bbc.co.uk/radio1/petetong/ 1998 saw the launch of Mark's imprint, Blueplate Records on which he had two big club hits right out of the box, both his own productions. The first was the club and pop radio (UK) hit "Runnin" by Basstoy featuring Dana Divine and the second was the underground hit "The Return of Nothing" by Sandstorm. Both got play by boldface names like Paul Oakenfold, Dave Seaman, Deep Dish, Danny Tenaglia, Paul 'Trouble' Anderson, and Carl Cox. In 2000 Mark produced 'Butterfly' for Kylie Minogue's comeback album, Light Years. Two years later, in 2002, he produced and co-wrote a second single, 'Give It To Me' for her 8x-Platinum Fever album. The pond-hopping continued, as Mark the intercontinental songwriter commuted between Chicago and London to work with a variety UK-based pop hopefuls, several of which are now about to be released on Blueplate Global. Overseas artists also showed up on his rapidly expanding remix discography, as Mark post-produced singles for Heather Small, Geri Halliwell, Lighthouse Family and The Shapeshifters as well as US artists Jamiroquai, Prodigy and Yello. In 2005 he released his first Defected Records single, Mark Picchiotti Presents Jersey St.'s 'Love Will Be Our Guide.' With a new studio and new label deal (Blueplate Records is now Blueplate Global Records, a joint venture with the re-launched Strictly Rhythm label), Mark is back and busier than ever. Recent releases include 'Turn It Up' by Basstoy featuring Dana Divine, which went to #1 in both the US (Billboard) and UK (Music Week) and was Billboard's #3 dance track of 2008, 'So Sweet' by Mark Picchiotti featuring Dana Divine and the just released (March 10, 2009) 'I Believe (Remixes)' by The Absolute featuring Suzanne Palmer. Up next on Blueplate Global are 'Rise' by Deep Influence featuring club favorite Zelma Davis to be followed by Mark Picchiotti featuring Alec Sun Drae "Feel Like Singing,' a new Basstoy track, the solo Suzanne Palmer anthem 'Love Reaction,' Master & Muze 'Well Alright' and a stunning new single from hitmaker, Eric Kupper. (We said he was busy.) Mark Picchiotti will be touring the US throughout April 2009 as the official DJ of The RuPaul's Drag Race Winner's Tour/The Absolut Fruit Tour, and is preparing a UK/EU tour to support his Blueplate Global releases. Find the latest tour dates on his page on penetrationinc.com