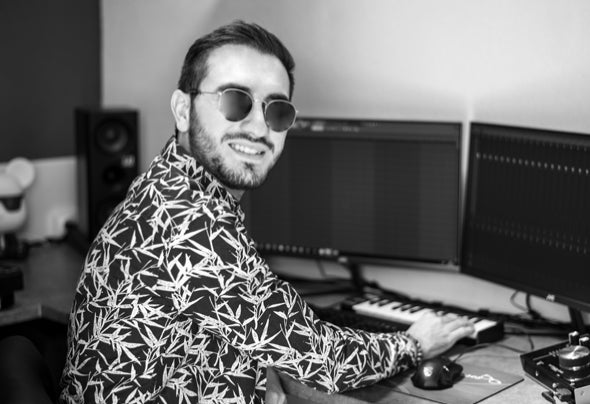 South of France native,Tommy Glasses counts among the rising DJs of his generation. Born in 1999, Tommy grew up along with a DJ as a father. His passion and interest in music production increased when at 14 he started to first mix some songs at home. Year after year, Tommy went further and created his own melodies on top of reworking some famous Funky House DJ-best tracks. The first Tommy’s track was released in June 2017, followed by an extended play on the Monaco-based label Moving Head Records. Since then, the success story still goes on with many productions signed with some prestigious international labels such as Nervous Records, King Street Sounds, Purple Music, Papa Records, Milk & Sugar, Midnight Riot, Flamingo Rec, Tropical Velvet, SPA in Disco, Sakura, Mood Funk, Imagenes Records and more... Although Soul-Funk-Disco, Nu Disco-Indie Dance, House oriented, Tommy Glasses always adds his own touch, meaning an 80’s Funky and Groovy sound. Like a personal musical signature subtly incorporated in some beautiful tracks that many worldwide Djs and radio stations play more and more from the French Riviera to London or St Barths... Not to mention a new collaboration with the famous Radio FG that started in 2020. In 2020 & 2019, he is classified in the Traxsource Top 100 Artists Soul Funk disco and Nu Disco Indie Dance. To end, an album might be in the pipeline... Stay tuned ! Follow Tommy Glasses Instagram: tommy_glasses Facebook: Tommy Glasses Website www.tommyglasses.com