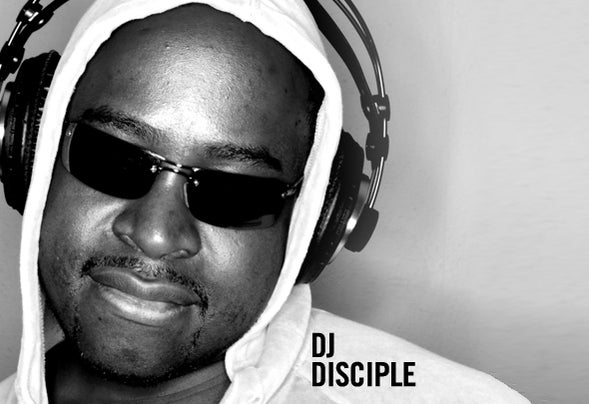 To try to categorize Disciple is pointless, such is his diverse talent. Happily surging between dance music genres,he runs THE NEXT LEVEL PARTY, a deep house event that runs monthly with a huge following, and his bi wekly residency Lesouk, the biggest electro-house night in New York City. His travels in 2007 include a monthly residency in Miami’s Karu & Y., Avalon (LA) Latin Lovers (Amsterdam), Soul Heaven (Columbia), Utopia (Poland) and Dragon- I (Hong Kong), to name a few. His UK profile is legendary, working in more clubs than any American DJ to ever grace these shores. For the past 12 year Disciple played in at least fifty clubs a year for the last ten years. For the last five years his travels have been documented on www.djdisciple.com. You can see his current page on http://www.myspace.com/wwwdjdisciplecom “Around The World In 150 Clubs” is a book DJ Disciple is finishing contributing to the clubs he has played in for the last 20 years. He produces music on his label Catch 22 Recordings. Disciple’s last record ‘”Work It Out” is now a hit record due to the storm it created in Ibiza in 2006. This year BBC’S Radio 1 DJ Pete Tong played the record for 3 months straight.Xtravaganza (UK), Blanco Y Negro (Spain), Poole Music (France), Networks (Italy) and United (Belgium) are just some of the countless labels and compilations in which this record appeared. The labels last release “Changes” is a new collaboration with David Tort and DJ Ruff. “Changes” stayed on the Beatport digital top three downloads for two months. Played throughout the Winter Music Conference by DJ’s Roger Sanchez, DJ Dan, and Erick Morillo (who used it on his latest Subliminal Sessions album) and will not lose any steam in the forthcoming months to come. The labels first world wide hit was "Put Your Hands Up" By the Black & White Brothers. Success continued with the number one billboard hit "Caught Up" "It's Easy" and "Yes" from Disciple's My True Colors album. D&M, Brooklyn Soul Boys, Banji Boys, Street Preacherz, and Nympho Soundz are Disciple alias with releases licensed to hundreds of compilations. This year Disciple released Uploaded, the first digital CD exclusively for download through Seamless recordings from the UK. With the world literally his oyster Disciple is reassuringly grounded as to his future and his role in general in dance music: "For me it’s important to remember that DJing made me what I am and that's always the first for me. I see dance music going through a very big change shortly. It can't stay the way it is and I aim to change with it. You have to. Ultimately it's all music and if you love and understand music, you'll know that its fluid, forever flowing, forever changing. It's wonderful to embrace that and go with the flow but yet always be original, always be yourself." DJ DISCIPLE www.djdisciple.com www.catch22recordings.net