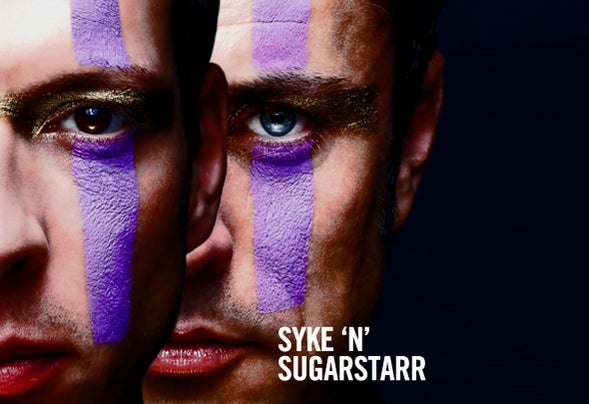 Syke’n’Sugarstarr are something of an enigma, finely balanced between cool club work and absolutely rocking remixes, pushing back the boundaries on their own label, whilst becoming in demand producers for external projects looking for that extra special something they can offer. Working together in the house music biz since the late nineties as producers and DJs, they have been responsible for some absolutely enormous club tracks currently and in recent years. Producing their own tracks is just one part of their operation, however. An impressive list of production and remix credits which includes such renowned artists as Mousse T, The Disco Boys, Incognito, Armand van Helden, Gadjo and Hardsoul is testimony to their skills in the studio. Recognition of their expertise is reinforced by the breadth of record labels that Syke’n’Sugarstarr have worked with, ranging from majors such as Universal, at one end of the spectrum, right through to cutting edge dance labels like Ministry Of Sound, Swing City, Soulfuric, Subliminal, Southern Fried, Peppermint Jam and Kontor Records, not forgetting the boys’ own 'Do The Hip Recordings' imprint. Late 2004 saw the release of their first longplayer, the aptly named 'Best Of Syke 'n' Sugarstarr'. A decidedly neat little compilation featuring their most prominent works to date. Amongst them, big tunes such as “Ticket 2 Ride” and “Release Your Mind”, which enjoyed worldwide release, further cementing the guys’ reputation as premier producers. 2006 kicked off with their latest single entitled "Are you watching me, watching you?" featuring vocals by Alexandra Prince, who previously sang on Gadjo's hit "So many times" and which was also co-produced by Serhat, the one half of S’n’S. Licensed around the world in many key territories, “Are You Watching…” proved worthy of worldwide release, backed up an their global tour, taking in Australia, North and South America, Russia and back across Europe. The final part of the jigsaw puzzle is the S’n’S record-label "Do The Hip!" which the Hamburg duo Matthias and Serhat run themselves, linking together nicely with their "Do The Hip!" club nights which continue to go from strength to strength. The most appealing aspect of Syke 'n' Sugarstarr is just how fresh they sound, both in their productions and their DJ'ing, which, as anyone who has seen them on the decks will know, is as diverse and experimental as their studio work. The best way to describe them would probably be as musical pioneers, which, in this age of copyists and covers merchants, is exactly what the world needs right now.