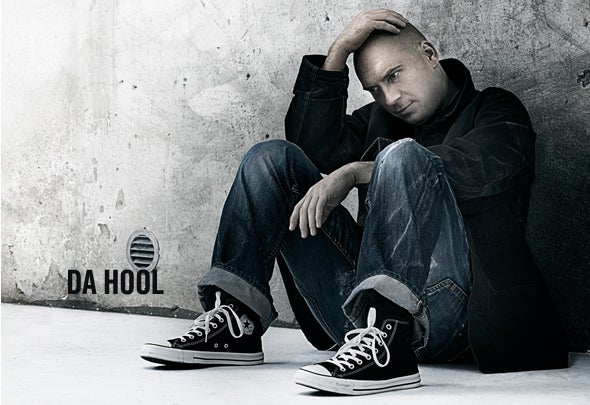 Frank Tomiczek: aka Da Hool – one of the main guarantors for the publication of the “techno-underground” at the end of the 1980s. At this year a new club culture was born and would become an inherent part of the music world. All this makes him an important catalyst of the unforgettable electronic avant-garde and Techno Generation / Rave Nation. The former football fan committed himself completely to the very young but still growing techno-movement. The youth rebelled against the antiquated parental views with mass rallies like Mayday where 20.000 ravers dance till morning. DJ Hooligan became one of the most important production precursors in Continental Europe and was celebrated as “Underground Hero”. During the following years, Hooligan toured through all the hip clubs and raves throughout the world and produced remixes for some artists and projects of the time (e.g. Sven Väth, Westbam, Paul van Dyk). He produced his own projects, as for example “La Rocca”, “Central Love”, “Hool’s Experience” and “An Active Trip”, for labels like Frankfurt Beat, Logic Records, Music Man Belgium, Important Records, etc. In 1994 he signed his first Major-deal at East- West Records. His first single “Rave Nation” reached ..16 on the official German Charts and was sold over 200.000 times. In 1996 the Major rejected his fourth single “Meet Her at the Loveparade”. Without further ado he started his own business Hool-Productions as well as his label B-Sides, where projects like “Da Hool” or “Central Bass” (together with Juergen Pluta) emerged. This is what enabled him to bring to market his own single. “Meet Her at the Loveparade” hit it big and would become an acoustic manifesto of an upcoming mainstream youth culture. From now on DJ Hooligan would call himself Da Hool; he remained autochthonal, a DJ in great demand and famous all around the world. Thanks to his international reputation, he travelled all five Continents and played music in the best locations. Although Da Hool is a big star, he still visits the small clubs to keep in touch with the scene. Da Hool has done a good job with his remixes – in 2003 his “Da Hool Remix” of Armand van Helden’s house-hit “The Funk Phenomena” reached ..1 on the German Dance Charts, got on the Media-Control-Charts and was the most popular track of the year in the UK. Moreover, he published his tribal-track “Sip by Sip” as Hool pres. Freakstylaz at the New York nr. 1 house-label Sondos/Subliminal. At the beginning of the 21st century, Da Hool is a distinguished producer at labels as e.g Kosmo, Silly Spider, Subliminal, Ministry Of Sound, Hooj Choons and Toolroomtrax. From this follows that Hool is not only part of the german DJ’s elite, but also enjoys great popularity anywhere else. His many-sidedness and his awareness of the changes that come with the time are the key facts for his success. The year 2008 will also be a flourishing one: he will create a powerful album that will contain the sounds of the VIP’s of the scene. www.hool.tv