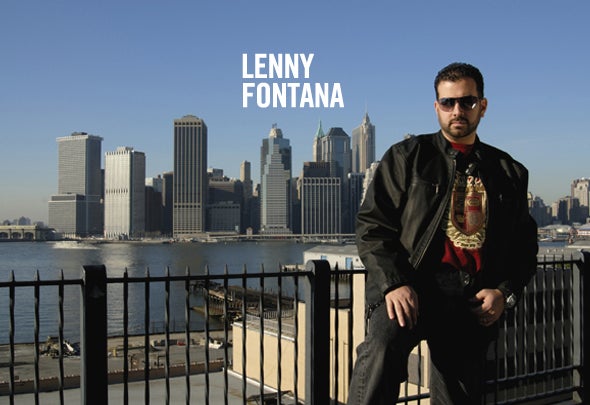 Dj, Hit Making Producer, and Remixer this is what Lenny Fontana is known for. Over the past years he has shown to be a leader who sets new trends in dance music. He was born and raised in New York City -"The Melting Pot" and this is where he gets his street music smarts in creating all those new sounds. His contributions through his music in the house music scene has given him much world recognition. Even till now with the ever changing paths that are happening today he has embraced the change and now will succeed to conquer in this new world of electronic music. He feels it is a rebirth or a second coming. This new genre of music has taken him back to a time when Acid House had just begun and it was fresh and exciting. He has now accepted the world of elecktro to become part of who he is today.......... In the early days "I started listening to the mastermix with Shep Pettibone on 98.7 F.M. Kiss New York in 1982 and was dazzled by his fantastic editing skills and great music. This started my passion to be a DJ and to buy records. I immediately went out and purchased turntables, a Bozak mixer and my Technics Reel to Reel, and practiced what I had been hearing on the radio, from the years of 1982 till 1986. For then I was awarded my first big break at New York's "Underground" in Union Square. Until that glorious moment I played at private and house parties to learn how to play to a crowd. I will say that going to the Garage and Better Days had a major impact on me as far as wanting to be a DJ. These guys who controlled every emotion that went on in that room for a day where worshiped like they were Gods. It was such a great experience to get to see all this and to be schooled on how to play to audience of that caliber. And that education was invaluable to me." In terms of production, Lenny's big international break came with the song "What You Need", produced by him under the name Powerhouse feat. Duane Harden, which instantaneously hit the top 15 on the pop charts which locked a spot in the 11 postion in the U.K. and Europe. This record hit the mainstream with its video being played constantly on MTV in the U.S., Mexico, and Europe. They even did live performances one of them being on the legendary Top Of The Pops show in the UK. DJ Magazine proclaimed that the single was a neck ahead in the annual Most Hammered Tune at the Miami Winter Music Conference contest." Dance Music Authority calls "What You Need" "a club anthem". The track became popular with DJs like Danny Rampling, Little Louie Vega and Tony Humphries. Lenny Fontana has played his part in the history of House music. The year after he had the hit with Defected came another big record that hit top20 in the UK which was "Chocolate Sensation" which was released on FFRR/Warners. This now proved that he can create pop records from a great dance record. He has now reconnected with Defected Records again and just released his new record "The Way" which showcases the legendary Octah'via form CandC Music Factory on the lead vocal. When it comes to DJing, Lenny Fontana has worked stateside for some of the most highly respected promoters including "Free Bass Society", "Together", "Harmony", and "Good Vibe Crew". Under the banner of "House Music Marquis", he was very popular at numerous events celebrating "Gay Pride Week" throughout the U.S. Like all big name DJs, Lenny plays at some of the finest dance spots throughout the world including: Pacha (Ibiza), Avalon (Boston), Club 69 (Rome), Angels of Love (Napoli), Ministry of Sound and The End (London), Does Your Mamma Know (Los Angeles), Sound Factory (San Francisco), and Clubs Gold and Yellow (Tokyo). Countries where Lenny is particularly popular are Austria, Australia, New Zealand, Malaysia, Italy, Eire, UK, Switzerland, Japan, Norway, Canada, Spain, Portugal, Mexico, Poland, Yugoslavia, Germany, Italy, United Arab Emirates, Brazil, Greece, Colombia, Singapore, France, Russia, Croatia and Cyprus. ..