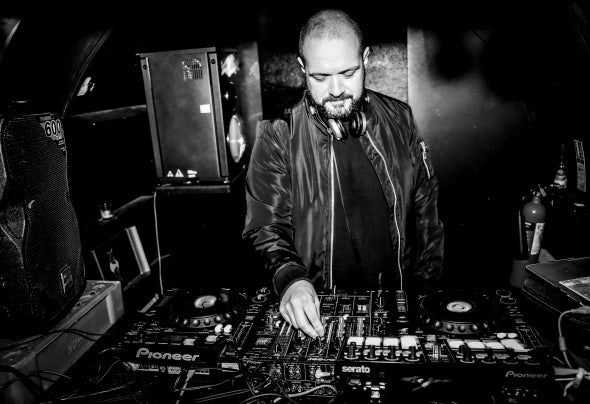 JAY KAY ‘Best Club DJ’ 2007 & 2008 Fate Magazine JAY KAY started DJ’ing in 1990 at Northern Ireland’s most influential House Club Kelly’s Portrush (Now Lush), where he carved out his knish and developed his own sound. Within a short period of time he began to gain regular work at two of Ireland’s now legendary club’s of the time namely ‘Kilwaughter House’ Larne and ‘The Point’ in Donegal. Jay then upped sticks and fled to the North’s capital “Belfast” upon doing so he gained residencies and guest work at some of the cities top clubs like The Network, Space and Thompson’s Garage (were he still holds down a weekly residency to this day). Firmly established now as one of Belfast’s leading djs it was only right that when club Milk opened amid a blur of publicity that Jay became one of the residents a residency that lasted 7 years and saw him share the Dj Booths with some of the worlds biggest Djs like Roger Sanchez, Eric Morillo, Steve Lawler, Seamus Haji & Louie Vega to name a few.1998 was a busy year, as well as picking up the Best Northern Ireland DJ at the Bacardi Dance Awards he also gained a monthly residency at “Vena” a top Edinburgh club night in Wilkie House, Then also got a main stage slot at Northern Ireland’s first Dance Festival “Planet Love” which is still going strong to this day and then Jay took his first shot in the studio and produced his debut single entitled “Expose” which was released on independent Irish label Little Fluffy Records. Fast forward some years and alongside his Club Milk residency Jay also took up residencies at Earth in Derry, after hours club night ‘Last Chance Saloon’ (held in The Venue Club) in Belfast, completed a successful tour of Canada and entered a stage in his career were he was djing 5 night s per week, quit e a feat for anyone im sure you will agree!! In 2007 Jay won title of Northern Irelands Best club Dj by Fate magazine and won the same title again in 2008 These days you can find Jay residing weekly in different clubs in the UK and worldwide Also it was in 2007 Jay thought it was time to get back into the studio to get his ideas out on the dancefloor and in that last year he has his own studio and runs Glamour Boy recordings and has a string of tracks and remixes out and forthcoming and has done remixes for the likes of D-Ream, Dj Disciple, Seamus Haji, Graeme Park ,Oliver Lang, The Japanese Popstars, Reza, Chris Cargo, K-Klass & Peyton plus has a lot of his own original material due for release. As well as doing his own production he also has various other projects like Junk De Punk, Glamour Boy, Delta Kids, Stere Dj's, Hooks N Kay and Cuka Kings covering all sides of house and re-editing everything in his sight. Also Jay now has been flat out recording his own original t racks and get t ing lot s of remix work and is defo one of 2009 key players getting big support and plays from the likes of Carl Cox, Roger Sanchez, Oliver Lang, Nick Warren, Peter Gelderbom, Hoxton Whores, Seamus Haji, The shapeshifters, K-Klass etc etc