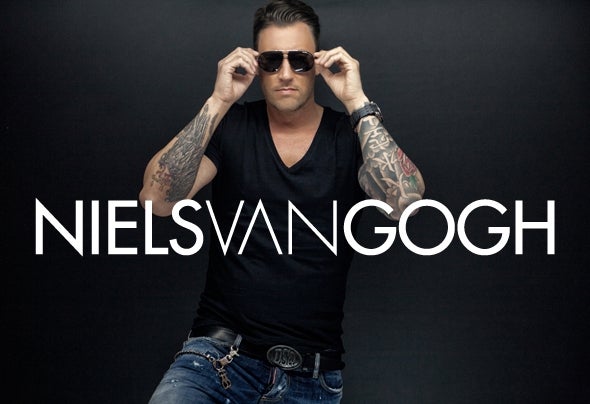 DJ and producer Niels van Gogh from Augsburg has been playing the turntables of clubs internationally since 1996. His career started at the Pleasure Domes in Augsburg as a resident DJ where he was wowing the crowd regularly with his sets.His fan base grew quickly and he played countless gigs in clubs and on festivals like Nature One, Rave on Snow, Loveparade (Berlin), Energy, Street Parade (Switzerland), Rave´n Cruise or City Parade (Belgium). But his big break-through was in 1998: His track „Pulverturm“ reached the Top 20 of best-selling singles in Germany and got international attention as well as a placement in the European charts. In Belgium „Pulverturm“ went Gold and over 20.000 vinyls were sold worldwide. The great succes of Pulverturm was crowned with the German Dance Award 2000. Since then Niels van Gogh was travelling around the globe for bookings in Southafrica, Australia, Brasil, Thailand, Russia, Israel and of course Europe.Within a few years „Pulverturm“ became a club classic and in 2007 it was time for a remix. The new mix was an immediate success and hit number one of the European club charts. Almost every Top DJ was playing the track. In the following years Niels van Gogh worked on many different projects, for example „City Sneakerz“ with Eric Smax and Thomas Goldwhich which was released on the legendary Ministry of Sound label. Niels’ single „House Arrest“ became the soundtrack for the Chio Chips advertisement. His remix for Delirium feat. Sarah McLachlan - „Silence“ was not only an immediate number one hit of the European Club Charts but also on Beatport, the world’s biggest Download portal. As a result in 2009 he received the Beatport „Best Progresseive House Track“ Award.In the same year Niels signed with Scream & Shout Recordings. His first single released on this label, „Dreamer“, stayed in the Top 10 of club charts for weeks. Other cooperations with Ramon Zenker (aka Emilio Verdez), and Daniel Strauss followed. Niels released many new tracks on international labels like Spinnin´, Cr2, Hed Kandi, Hotfingers and of course Scream & Shout and did remixes for Tom Novy, Milk & Sugar, Lissat & Voltaxx, Plastik Funk, Tune Brothers, Schiller, Tomcraft and many other artists. Furthermore Niels van Gogh is responsible fort he succefull compilations "We Love House" und „We Love Electro“. Niels’ new single „Emergency“ which he released 2011 together with Daniel Strauss on Scream & Shout earned full support from many international Top DJs like Fedde le Grand, David Guetta, Roger Sanchez, Joachim Garraud, DJ Antoine and Jesse Voorn. But despite his international success, Niels is still attached to his home town and he decided to shoot the video for "Emergency" in a club in Augsburg. Niels van Gogh is on a trajectory of success and will continue to surprise us with new projects. At the moment Niels is working in the studio and preparing many new tracks and remixes. Just stay connected.