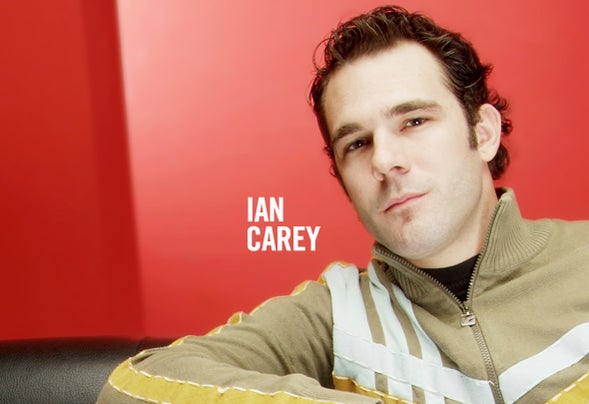 IAN "45" CAREY ELAN REC., DEFECTED REC., MINISTRY OF SOUND, "SOUL PROVIDERS", U.S.A. / THE NETHERLANDS For those not in the know, Ian "45" Carey is and has been over the past couple years a key player in the House scene in the USA and Europe. His recordings and remixes have been released on labels such as Élan, Defected, Universal UK, AM:PM, Ministry of Sound, Warner Brothers Germany, Hed Kandi, Azuli, Tommy Boy Records, East West Germany, Houseworks Switzerland, Oxyd Records Italy, Slip N Slide Records UK and countless others… His first vocal production, with Jason Papillon as Soul Providers, "Rise" was a crossover hit around the world. When asked, Ian and Jason both say they had no intention of making a mainstream record; it just worked out that way. Since then Ian and Jason have made many underground anthems (such as "Try My Love", "I Don't Know", and "Let The Sunshine In") staying true to their soulful sound and not compromising their music to fit the mold of current radio trends. Ian grew up in a small town in Maryland, USA about 2 hours from Washington DC. He had been exposed to music at a young age, as his father (RIP) was a live sound engineer and ran a sound reinforcement company and had engineered for such groups as Kool and The Gang and The Duke Ellington Orchestra and his mother played guitar and sang as a hobby. By the time he was 7 or 8 years old he was able to mic a stage for a concert and when possible, Ian would travel along with his father during the summer vacation making tour stops and seeing America from east to west. Throughout grade school Ian never got very good grades, but when he reached high school he realized the only way to get out of the small town he lived in was to go to college, he decided to put a little more time into school and at graduation he got many scholarships and went on to "study" at University of Maryland in Baltimore. This is where he discovered dance music. Ian had already been apart of the graffiti-writing scene in Baltimore, Maryland, and through that he met hip-hop DJs throughout the city. This was Ian's next passion; he put down the spray can and bought some turntables. For the first few years of Djing he was playing mostly hip-hop and went on to do a Tuesday night hip-hop party in Baltimore's Club Midnight. At this point he started working in Music Liberated record store as a buyer and sales rep. This is where he was properly introduced to house music. At the same time hip-hop was coming out of the underground and becoming more materialistic and more poppy, so Ian needed to find something else to give him that underground feeling. He started fingering through the House music bins in the store and he was hooked, a new passion! Soon after, he met Jason Papillon, Ian's partner in the project Soul Providers. Jason and Ian would go every Saturday to Paradox in Baltimore to hear DJs such as Teddy Douglas, DJ Spen, DJ Karizma, Tony Humphries and Joe Clausell. At this point Ian knew that House music would become his life, and decided to put his audio knowledge to a use and start producing records. At a certain point in 2003 Ian got really fed up with the House music scene in America and decided, if he were to continue on his journey it needed to be in Europe where the House music scene still thrives. So after some convincing, his wife quit her day job, and they went all in, sold their house and moved to The Netherlands, where Ian now resides. Since then he has been busy producing under different projects and names including his latest project Saturated Soul, a collaboration with Eddie Amador. Ian now has some solo productions under his belt including "The Power" on Defected/Fluential Records. He has also been very busy with remixes. With Jason as Soul Providers they have remixed records by King Britt/Ursula Rucker, Silverstone, Hardsoul and E-Smoove (AKA Thick Dick). On the solo tip, Ian has remixed records by Michael Gray, Martin Solveig, Sebastian Leger, Blaze feat. Barbara Tucker, Kid Crème, Danny Marquez and Ferry B., Dina Vass, Stonebridge, Cindi Lauper and Blue Chakra, for labels such as Defected, Ministry of Sound, Élan, Hed Kandi, Soulfuric and Houseworks. DJ wise, Ian is very busy in The Netherlands and abroad, he has played in countries such as Switzerland, Italy, Sweden, Finland, Latvia, Poland, The Ukraine, Austria, England, Spain, Canada, and the USA… Ian continues to pay his dues and give whatever it takes to help the House music scene make its way out of the dark... Stay tuned for new productions, remixes and dj gigs, and be a witness to Ian's magic as he rise, rise, rises to the top! Fore more information: iancarey.supraton.eu © 2006 Supraton Entertainment, Hamburg – Germany