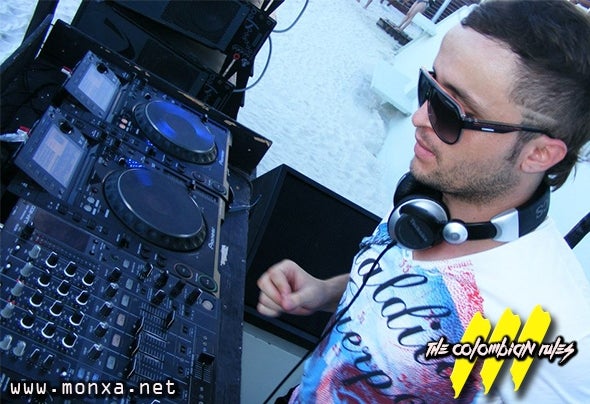 DJ Monxa, one of the Colombian artists with the largest international projection. Since 2008 it has become one of the most recognized influences in the electronic world of his country.Producer of countless songs that have turned the globe, successes that have been played by some of the best DJs in the world, “The Joker (Dirty Tech & Addicted House), "El 28", "I Love Tamisha", The Heaven March", "La Ghetto", “I’m The Rock Star”, “Start To Move”, "La Titina", "El Bendito No". “N.Y.N.A”, “One Geisha In Berlin”, “Wild Space”, “La Bayaina”, “The Exorcist”, “Back To Home”, are some of the songs that are played in the best clubs, the best radio shows and published in the top labels in the world.His artistic growth has led to work for labels such as: “Spinnin Records”, “Stealth Records”, "Juicy Music", "Nervous Records", "Sneakerz Muzik", "Sume Music", “Oxygen Records”, "GrooveMasters", "Housepital Records", “Housessions Records”. In addition to this, had the pleasure of share sessions with national and international djs, and make vibrate more than 20 cities in his native country "Colombia", Countries Such as: Italy, Germany, Brazil, Panama, Venezuela, Mexico, playing in the best clubs, raves and fashion shows, but most importantly, kept in high his name and style around the world. Creator of the brand The Colombian Rules, which is now known worldwide as one of the most important in Latin American of House & Tech House Music. Influenced from the beginning by the House, Funky, Techno, turned his style into something delectable, passing from the House, Progressive, Tech, as the softer, through the most effusive rhythm, leading the public to a euphoric and fun way. His sets are recognized by his energetic performances and the feeling that he passed, remembering that music frees body and soul.It is impossible to mention the countries that have enjoyed the music of this producer, in short words; the entire planet has come to vibrate with the music of this excellent DJ Producer.