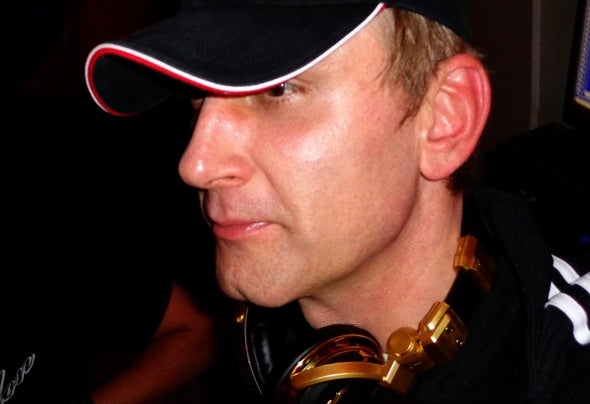 Todor Ivanov aka DJ AK47 ex DJ Hitman has firmly established himself as the most wanted DJ/Producer/Remixer in Eastern Europe. Coming from a family with a father of various musical talents he was exposed to music day in & day out. As he grew older & the age of disco came along, he started to see his love for music grow. In the Fall of 1995 AK47's passion for music grew more & more with the release of his first mix compilation 'Rock the House'. After his first release in 1995 DJ AK47 rocked the crowd with the release of his second mix compilation 'Release Some Tension' in Spring 1996. This was the turning point in his career & this was when the high-energy stage show all came together as one. In the year 2000 DJ AK47 won the title "Millennium DJ Champ". Due to his 16 hour sets around his own country & in the USA it allowed the judges & fellow clubbers to make the final decision to award him the prestige title. "I like to take people on a journey with my DJ sets, building an atmosphere & I always like to play something different, maybe a track people haven't heard in a long time or haven't heard at all. I love to bring new music to people, I feel that like a DJ I have this responsibility. I have always enjoyed playing longer sets in venues as well as I feel I can build a much stronger set with more time." With the limited edition CD release in 2000 'The Hard Way Is Open' it certainly opened a door to higher levels of energy. With his double impact that combined dancing & mixing, DJ AK47 put the two on the map & was recognized for having one of the highest energy stage shows on the circuit. Taking the world by storm DJ AK47 has travelled throughout his own country, Montenegro, Greece, Italy, Switzerland, Germany, France, UK, Australia, the USA, etc. Along with the countries named above his non-stop energy show has also been in places such as Skopje, Bitola, Budva, Kotor, Thessaloniki, Crete Island, Zurich, Berlin, Paris, London, Brisbane, Las Vegas, Miami, New York, Tennessee, Myrtle Beach & Panama City, just to name a few. No matter where DJ AK47 travels, he has the ability to touch people through the art of dance & music. Aside from this, he has played at numerous product launches & VIP fashion parties to celebrities around Europe & USA. DJ AK47 was also the first foreign resident DJ at the biggest & most exclusive clubs on the Adriatic Coast, club Maximus in Kotor & club Top Hill in Budva, both in Montenegro. In 1993 DJ AK47 creates his own record label called DMK. He has been producing for more than a decade & got the opportunity for remixing other artists, mastering & tuition. DJ AK47 has played back to back with some of the worlds biggest DJs like John Kelly, Roger Sanchez, Antiloop, Junior Sanchez, Leon Bolier, Maurice Noah, Spiller, Sharam Jey, DJ Pippi, Dave Seaman, Eddie Amador, Danny Tenaglia, Mario Ochoa, Gene Farris, Robbie Rivera, Armand Van Helden, Christopher Lawrence, Sandra Collins, Erick Morillo, Harry Choo Choo Romero, Claudio Holze, Jim Breese, Tom Novy, Fedde Le Grand, Stereo Palma, Steve Angello, etc. On top of that he also started his own DJ/Artist booking agency (Non Profit Group) Volume Artists. "As a DJ I've reached the level I wanted to reach. I personally feel that as far a party goes, I rock it with the best of them. My new challenge is to reinvent myself as an artist." The year 2011, DJ AK47 started to work with HOUSEVISIONS RECORDS. His EP called "Drive Me Fast" was out on BEATPORT on the 06th of October 2011 under Housevisions Records. On the 02nd of February 2012 his high rated remix of "Native World" by DJ Boka came out on BEATPORT under Lophius Records, 4 EPs under Slippermouth Records, remix of Mark Fisher's track "Ich bin ein Berliner" under Plusquam Records, Tech-House 2012 100 Tracks (top 100) COMPILATION with 2 TRACKS "Origins" & "STEAM" under Plusquam Division, many amazing compilation and EPs under Plusquam, my EP called "Vinylism" out on Beatport under Toolstyle Records, etc. Stay tuned for more singles, remixes and albums. DJ AK47 is also known as a humanitarian because he love to help people. "Good people do good things because it is right, not because some unseen god bestows it upon us to do so."