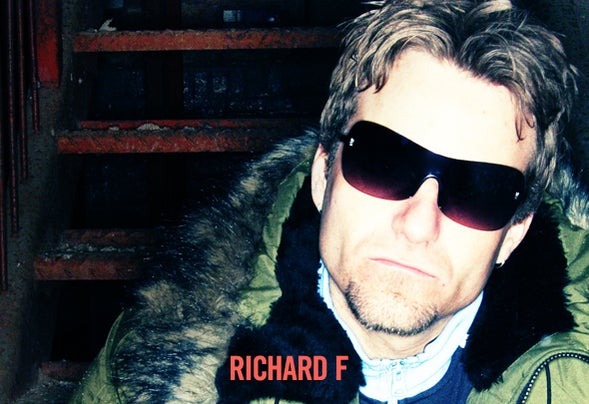 Richard F. Originally from Florida, DJ - producer - remixer Richard F began his journey into the world of house music at the early age of 13. After spinning in clubs throughout Florida, it was time to expand. So Richard headed west until he reached what would be his home for the next ten years --- Los Angeles, CA. It was Los Angeles and all that surrounds it to make southern California the perfect background for Richard to develop his relentless sessions, dripping wax all over the country and beyond. He began as the mix-show coordinator assistant at KGGI 99.1 fm, which quickly turned into a regular mix-show spot. Moving onward and upward he landed the prime mix-show slot of Friday and Saturday nights at 93.5 FM. He spent the early 90's experimenting with the techno thing, then the break-beat thing, growing into harder, more progressive sets but in the end Richard always stayed true to house. Back to the heart of house brought him back into the heart of the LA scene where Richard F was a featured guest DJ on 103.1 Groove radio and Power 106's infamous mix-show 'powertools'. As a respected DJ with a loyal following, Richard F soon found himself instrumental to the growing club scene in southern California. At this point, it seemed natural for Richard F. to evolve into producing and remixing. Crossing over was done with ease for Richard F. as he instantly found his true passion and talent in producing. Having the ability to redefine his style has earned him the reputation of an innovative creator. Richard F's first 12' imprint of 'High Octane' on underground construction came in March 1996. Soon, he had a full discography of remixes like 'Raise the Alarm' by the Sharp Boys on Azuli Records, 'Larger than Life' by the Backstreet Boys on Jive UK, and 'What You Need' by Powerhouse featuring Duane Harden and his classic Georgie Porgy 'Life Goes On' remix to name a few. His original productions include 'Feels Alright' Subliminal, 'Cookie Dough Dynamo' Sondos, and Down and Dirty on Subliminal. Recent remix projects to Richard's name are 'Turn it Up' by DJ Pierre on Creedence, due out March 2004. After four years of being a major contributor to the Subliminal team Richard has decided to take his career to another level by starting his own label Spread Muzik. Richard created Spread Muzik as an outlet for himself to test the boundaries of House music. Spread Muzik's label release party was held at Bed in Sheffield. Outside of his production work, Richard F is DJing extensively both in the US and Europe. He is also releasing a brand new track called '5 in the Morning' on Subliminal Records. Due out June of this year and is already being played by all the top jocks.