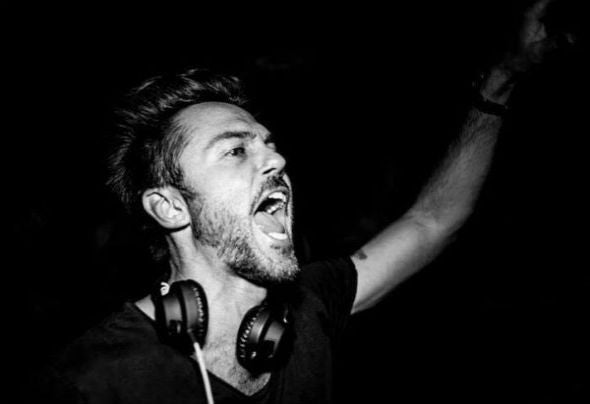 Tommy Vee was born in Venice, Italy, on 21st 1973, dj, producer and co-owner with Mauro Ferrucci of Airplane! Records. His career like record producer began after the meeting with Spiller in 1998. Their first international hit was Laguna EP, released by the renowned UK label Azuli. In 1999 he created with his friends Keller and Sisco a production team called Moltosugo, which started a collaboration with Mauro Ferrucci & Frankie Tamburo, founders of the record label “Airplane! Records”. This partership started soon to give its first results: “Activate”, “Check Out The Groove” and “You Make Me Wanna” released by the UK label Credence (sub-label of Parlophone, record company of such artists as Beatles, Queen, Pet Shop Boys, Tina Turner, Kylie Minogue, Coldplay.) who saw the collaboration with Dianne Charlemagne, also vocalist of Moby. In 2001 he took part in the production of “Point Of View” DB Boulevard (Platinum Record In Italy); later he co-produced with Moony the worldwide success “Dove”. In those years he remixed twice Moby, Raven Maize’s hit “Fascinated”, Green Velvet’s “La La Land” and Tweet “Boogie Tonite”; he had the honour of remixing Laura Pausini, including the popular single “Escucha Atento”. He produced with Mauro Ferrucci and Keller under the pseudonym of T&F vs Moltosugo “La Serenissima”, “Stay” (vocal version of “La Serenissima” which gained the eight position on The Italian Top Ten) and “Can’t Get Over You” both were sung by the house music legend CeCe Rogers. In 2005 he released his first solo album called “First!” who’s including the hit “Anthouse”, soundtrack of the Pringle’s advertsiment. “First” sold more than 40.000 copies in 5 weeks and entered FIMI’s top 15. Tommy was awarded with the second Golden Record. In the same year he released the album “Finally” produced by T&F vs Moltosugo. In 2006 in occasion of the 10th anniversary of Airplane! Records he mixed a compilation with some of the classics which made the history of the label.At the beginning of the summer 2007 he opened the Laura Pausini’s show at the stadium of San Siro with 70.000 people dancing. During summer ’07 Tommy produced with his old friend from DB Boulevard Diego Broggio “Over & Over”, with his label’s partner Mauro Ferrucci (aka Roy Malone) “Old Skool Generation”. In the second half of 2007 he collaborated with the dj and producer The Scumforg (already remixer of Dido, Britney Spears, David Bowie) for the single “Serenade”, who received good internationally feedbacks. In 2008 and 2009 he focused his work mainly on remixing italian pop songs like: Paola & Chiara “Second Life”, Jovanotti “Safari”, Marracash “Badabum Cha Cha”, Gianluca Grignani “Ciao Arrivederci” and J-AX “I Vecchietti Fanno Oh”. With the cooperation with his homey friend Roy Malone he remixed the Planet Funk’s single “Lemonade”, a fresh version with references to the typical house sounds from the early 90′s. In 2009 Tommy produced the Moony’s single “I Don’t Know Why”, which collected a worldwide success, especially in Brazil, Portugal and Spain. During summer 2009 Tommy and Mauro Ferrucci released the new remixes of “Stay” with versions from Jerome Isma-Ae, Thomas Gold, Nicola Fasamo & Bloody Beetroots. In 2010 he produced with the american dj/producer & rapper Mr. V the hit “Bang Bang” which gained the first position on Italian Top Single Chart. In 2011 were released Tommy Vee & Mauro Ferrucci pres. Keller “1975”, CeCe Rogers ft. Serena (with remixes from Whelan & Di Scala and Federico Scavo), John Lemmon EP and Tommy Vee & Mauro Ferrucci pres. Luca Guerrieri (remixed by Daddy’s Groove and Whelan & Di Scala), supported by international djs & producer like EDX, T homas Gold, Michael Gray, Bob Sinclar, Stonebridge, The Scumfrog and many others. Tommy is regularly guest in the best discos of Italy and Europe: he creates his one night called “NoName” at Peter Pan Club Riccione where he personally chooses the line-up, which consist of international guests dj’s as Axwell, Steve Angello, Sebastian Ingrosso, Roger Sanchez, Fedde Le Grand, Thomas Gold, Alesso, Norman Doray, Bingo Players and Arno Cost. He plays back2back with his friend Mauro Ferrucci at Villa Delle Rose, Blue Marlin Ibiza, Villa Bonin. On november 2011 Tommy and his label’s partner and friend Mauro Ferrucci mixed their first ‘Back2Back Compilatation’ released worldwide by Airplane! Records and Sony Music.During the summer 2011 he opened the three nights of the Wind Music Awards from The Verona Arena.In 2012 signed a collaboration with Nicola Fasano, Steve Forest & Luca Guerrieri featuring Mat Twice for ‘Tell Me WAF’ (‘http://youtu.be/lK9YJAL4Jrg) , a crossover track with a monster familiar riff.The 2012 begins with a remix for Antonella “Cuore Infranto” (X-Factor), productions with other international artists and the follow-up of “Bang Bang” with Mr V and Miss Patty called “Press Play.A great energy dedicated to discover new talents of the dance scene for Airplane! Records, with his partners Mauro Ferrucci and Keller.Recently Tommy was involved like a critic for themusic program “Star Academy” and he tried his hand at funny movie’s review for the blog Panorama.it.In March will be in the theaters, playing a cameo in the movie of Giovanni Vernia aka Jonny Groove “Ti Stimo Fratello”.In 2013 Tommy signs two great co-productions, the first one with The Cube Guys for ‘El Tromba’ and the second one with Marco Lys for ‘It’s Not Me’ that will be released on May by Skint Records, label of the legendary dj/producer Fatboy Slim.He also works with Mauro Ferrucci for the production of “Astro”, bonus tracks of Antonella Lo Coco’s new album called ‘Geisha’.Tommy is currently working on his new single for summer 2013. Stay tuned!