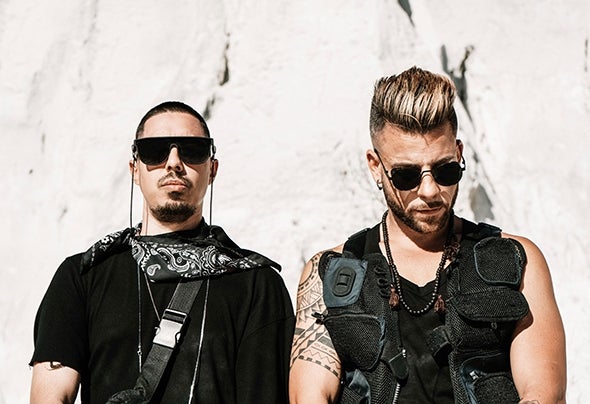 Duarte Carvalho and Emanuel Oliveira are No Maka, a music production and DJ duo from Lisbon, Portugal. Their moniker means “no problem” in Kimbundu, an African language. Together they create electronic pop m usic combining sonic elements from distant geographies with a strong Latin and Afro vibe. Their biggest accomplishment so far? Having a song chosen by Madonna herself and included in “Madame X” in a duet with Anitta. “Faz Gostoso” was originally composed for Blaya, a Portuguese singer, and released in 2018 amassing a huge success and reaching double platinum record status in Portugal, remaining ve weeks on #1 of the singles chart, being played in the radio nationwide and harvesting over 33 million views on YouTube alone. Madonna’s version, released on June 14th, has surpassed 10 million streams on Spotify alone, remaining her most popular song on that platform to this day. No Maka has the best of both worlds, as even without the Queen of Pop’s blessing they have under their sleeve hits like “Nota 100”, a collaboration with Laton, released on April 2019 and that has already reached way over 3 million views on YouTube. On the production side, their new song for Blaya, “Só Love”, released on May 2019 is already over the 2 million view mark on YouTube. Kazzio’s “Vou Seguir” and Blaya’s “Eu Avisei”, produced by No Maka, have over 5 million views on Youtube, Sweet California’s “Loca” harnesses over 9 million views alone. Innovators and trendsetters they released “#Sextou” with ILBF and Favela Lacroix, on June 28th, and it that same day the song reached the #1 spot on iTunes Portugal chart.