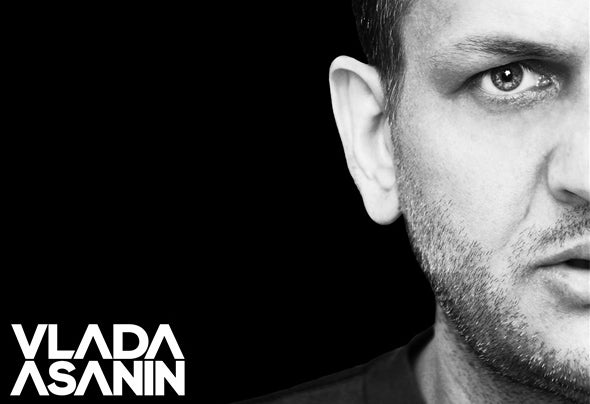 VLADAASANIN is no doubt one the most international names of the european electronic scene. His several references in many relevant labels all over the world and his residencies in some of the best clubs in Europe are just the small side of a life dedicated to music.Vlada Asanin was born October 18th, on a cold day in Serbia.Listening to the national radio of his country at the early age of 8 years old, Vlada enrolled in The School of Music in Belgrade, specializing in the clarinet and piano.Soon after, Vlada discovered not only a skill, but his lifes vocation due to the influence of his main idols, Depeche Mode, The Cure, U2, and Morrissey.Six years later at the age of fourteen, Vlada finished his studies at The School of Music in Belgrade and decided to head down a different musical road.Radically changing the direction of his musical preference to electronic music was a real reflection of Vladas personality that instantaneously earned him his first DJ residency in Pegaz, with a nightly capacity of 2,500 people. Feeling now that he had reconciled with abandoning his classical studies, Vladas musical whirlwind was about to commence.Observing the quality of clubs and DJs of Switzerland intrigued Vlada. Within a couple of months, the enthusiastic eighteen year old became resident DJ of Don Paco inZ urich-Wohlen, with a capacity of 3,000 people and with resident DJs as important as DJ Bobo of that era.By twenty-one years old, Vlada was an acclaimed DJ in his country as well as internationally. Now was the pivotal moment for him to return to Yugoslavia and make a grand entrance.Vlada began his residency in an enormous and mythical nightclub in Yugoslavia called Madona , with a capacity of 4,000 people and famed guest DJs at the zenith of their careers.Shortly after Vlada started his residency at Madona, he acquired other gigs in diverse nightclubs such as: Prince (Z urich), Black Out (Z urich), Don Paco (Wohlen), XL (Belgrade), Paraiso (Novi Sad), La Terraza (Trieste - Italy), F6 (Belgrade), Sloga (Sarajevo), Castillo (Montenegro), and many others.It was apparent to Vlada and to other DJs that the Mecca of electronic music was no other than Ibiza. Solely, for that reason, at twenty-six years old he traveled to Spain and settled in Madrid with the mindset of winning over the public.Vlada had his first opportunity to demonstrate his musical charm by conquering the audience at the legendary Cool Ballroom in Madrid. This consequently sparked Vladas meteoric rise in the capital, which lead him to spin at various places such as: Wind (Madrid), Lista 5 (Madrid), Velada (Madrid), Divino Aqualum (Madrid), Ananda (Madrid), Sala Heineken (Madrid), Bonamara (Madrid), La Diosa-Penelope (Madrid), But (Madrid), Pacha (Madrid), Budha (Madrid).Sala La Rivera, which had the largest nightly crowd, lured some of the biggest international names to share Vladas DJ booth like Mark Knight, Chris Lake, Kurd Maverick, Steve Lawler, Moby, Tocadis co, Wally Lopez , David Penn, Amo y Navas, just to name a few.Vlada has also headlined and performed in riveting nightclubs like Space Ibiza and Pacha Ibiza.During his residency in Sala La Rivera, Vlada began to devote his time to producing. Aware that this was going to be a challenge, he knew that it was the only way to gain respect from his contemporaries. Although Vlada had already realized some hits when he produced for a famed Serbian singer, Leontina, he needed to perfect his producing skills in order to dominate the electronic music scene.In 2005, without any time to waste, Vlada locked himself in the studio. Since then he only emerged to work at exclusive nightclubs both national and international. He was confident that his musical style was not only for an unforgettable set, but also to offer the world superior and iridescent productions.Vlada, in 2008, created two record labels, Crystal Sound Records and Zero Urban Records. In a short period his record labels have made a worldwide permanent mark in the music industry. According to Beatport.com statistics, 70 percent of produced tracks by him are sold outside of Spain with most success in the United States, England, Germany, Italy, Brazil, Columbia, Holland, Belgium, Russia, Japan, Canada, Mexico, Saudi Arabia, etc.Since then, Vlada has demonstrated his excellence for success by exuding effortless talent and working non-stop. He receives support by top notch DJs and producers like Jhon Aqcuaviva, Richie Hawtin , Oliver Giacamoto , Marco Carola , Mark Knight , Umek , Popof , Manuel de la Mare, Marsall, DJ Chus , David Penn , Abel Ramos , Alex Kenji, Saaed Yonan, Mario Ochoa , Dj PP , Jerome Isma-E, Thomas Gold, Nice7, Marcelo Castelli, Ndkj, Mastiksoul, Eric Entrena, Chris Lake, among others.Vlada has also executed projects for key international record companies such as Form , Younan Music, Nervous Records, Hotfingers, 303Lovers , Pornostar , Definitive , Stereo , Urbana , Beatfreak, Pacha Records, Muzik X Press, Blanco y Negro, Magna, Avenue , 4 Kenzo, DJ Center, Rusted , etc.During 2010 to 2012 , Vlada launched more than 350 productions into the market, and more than 100 are managet to get into world top chart of electronic music. ( Music Download Charts or Radio Charts )Riding high on a wave of relentless success, Vlada finds himself at the peak of his career. Not only is he having the time of his life as a DJ and producer, but as an artist who realizes that his destiny is to be victorious, since his colleagues, promoters, record companies and all of his fans attest to that future.Discover Vlada Asanin, the pure definition of technique and passion united.