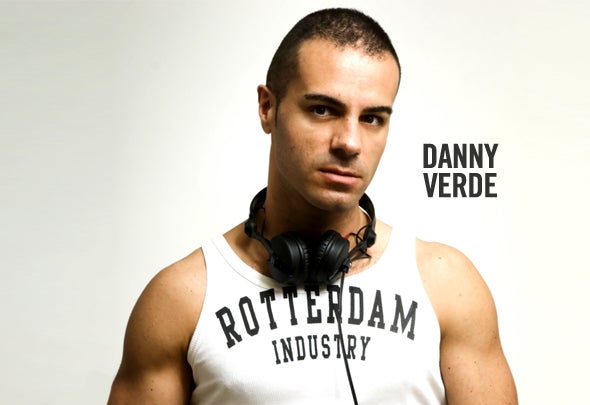 Danny Verde is a musical prodigy who has worked in all aspects of music; including house, dance-pop production, DJ, song-writing and vocalist. He lives just outside Milan in Northern Italy, where his recording studio “Holab Studio” has been home to many collaborations with international labels, artists, and producers. Danny has participated in more than 40 productions from 1994 to the present-spanning house to pop music. His first big success was with the Italian S.M.S. project, which produced two hit singles, including, “La Vie C'est Fantastique" in 2001, which was number 1 on the official Italian dance chart, as well as the follow up, "Just A Bit Of Chaos", which reached both number 1 in Italy and Brasil on Time Records. His next project was the huge international single "La Isla Bonita", a cover of the classic Madonna tune. The song was issued under the band name SQUEEZE UP and was published in more than 20 countries. The hit made it into the top 10 singles chart in France and was supported by a videoclip shot in Marbella, Spain. SQUEEZE UP'S next single was another Madonna cover, “Who’s That Girl”, and was licensed in Scandinavia, Japan, Russia and Greece. In 2008 Danny released the house track "Pushin To The Top"; in collaboration with The Halmadaxx Team and with the help of International DJ’s reached number 1 on the Ministry Of Sound download chart; number 1 on the Djdownload.com chart and was top 10 on the Beatport progressive house chart. Thanks to massive support from the hottest DJ's in Europe, above all in Spain and the UK, “Pushin To The Top” reached also number 1 on the Matinèe Group DJ's chart (Barcelona), which is one of the largest club promoter’s group in the world. "Pushin To The Top" has been officially released in Italy, Spain, America, Russia, Switzerland and Portugal. From that moment on, many important international labels and artists are hiring Danny to do remixes of their current productions; including Kult Records (New York), Interlabel (Germany), Blanco y Negro (Spain), Divucsa (Spain), Pagano DJ (London), Andrea Carnell (New York), G-Martin (Matinèe Group), Taito Tikaro (Matinèe Group), Hector Fonseca (Star 69 New York) etc. Danny's remixes consistently land in the top of the charts and are played in clubs worldwide. Recently, his mix of the anthem hit “Open Up Your Heart” produced for the top American singer Andrea Carnell (currently in the Billboard USA chart), was included in the “Subliminal Sessions” compilation put together by the legendary dj/producer Erick Morillo, for the prestigious UK label Defected / Strictly Rhythm. He has recently released his last single “Express Yourself”, in cooperation with the renowned international dj Phil Romano and performed by the english singer Anna Buckley, that is already at the top of the most important downloading stores charts. For any further info & details about Danny Verde, please visit www.myspace.com/dannyverde