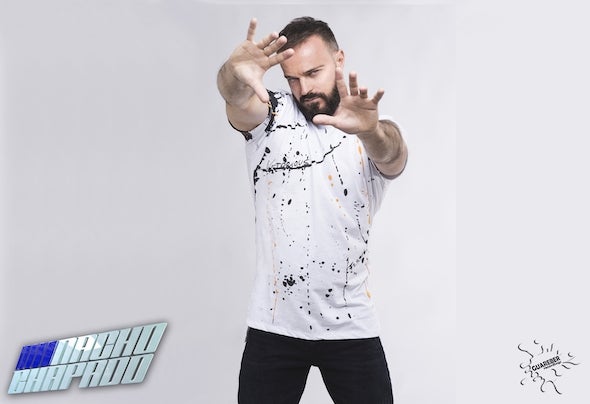 Jose Ignacio Chapado, better known as Nacho Chapado, was born in Barcelona, Spain and surrounded himself in music from an early age, not just working as a radio D.J. but also holding down various positions with a number of record companies and soon got the taste for not just DJ-ing live, but also engrossing himself into the recording studio "Mystery Luv" "U Can Change" "Behind The Eyes" "Coming Up", etc. His CV reads magnificently, the main focus being Italy and, of course, Spain, playing at a host of meets in his home country, including Fascination, Odarko Club, Into The Tank, StrongMatic, Bear Factory, & Ursus Planet, at nearly as many in Italy, places like Hub, The Block, Gorgeous I Am & Gay Village, Barbarella as well as featuring large at many of the festivals in both countries - Long Vehicle Week in Italy & Loveball in Spain, the massive Circuit Festival 2009,2010, and 2011 in Barcelona, Megawoof, Club Rapido, Zurich’s Selection Party and the Absolut event in Athens, Fou Club,The Week (Rio De Janeiro), Deleite (Floridanopolis) Megga Cub and Bubu Lounge (Sao Paulo), Ipanema Pool Party (Moscow)...He is also at the centre of a new tribal & progressive house music label, Guareber Recordings, which will see not just his, but close associations works released, which looks like making waves in Spain & beyond. Producer of many songs that have been heard in clubs and worldwide radio stationsHe has worked with producers like: Juanjo Martin, Dr. Kucho, Pedro del Moral, Oscar G, Ralph Falcon, Superchumbo, Yoko Ono 2011 Mixes etc . But, Nacho Chapado still loves to get behind the decks live, playing out to packed crowds at Club in Barcelona, Madrid, London plus zooming across to Italy & Belgium, German where his services are still in great demand and his style of full on tribal house beats, combining, tech-house & progressive, always with powerful songs, sounds which are incredibly addictive and dance delirium tempting. Nacho Chapado (DJ&Producer) Booking Contact: nachoplace@yahoo.es http://www.facebook.com/nachochapado http://www.soundcloud.com/nch http://www.facebook.com/guareberrecordings