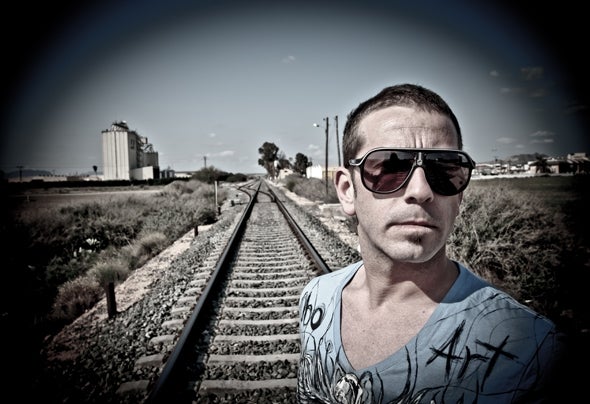 JUANFRA MUÑOZ (Cartagena- Murcia, Spain, 1980)This passionate of the music since he was very young, began his career as DJ in 1999, influenced by the dance sounds of the moment. Delving into new sounds, adapting to new trends, he got to know the House and avant-garde music, falling in love completely and giving a twist to his musical ideas. Through these more than 12 years as a dj, he has gone through countless booths throughout the Region of Murcia, highlighting, among others, residences and clubs in the area as pioneers, such as Teatre (Murcia), Gothica (Cartagena), Glub (Murcia), Closer After (La Manga), Mundaka Alc (Murcia), being a leader in the area in terms of house sessions. Other places where he has conducted performances, to name a few, Metropol, La Calle Centro (Murcia), Funk (La Manga), Buddha Music Club (Mostoles), Beat (Mostoles), Mandala & Maui Club (Mojacar), Metro Dance Club (Alicante) and so on. He has played for musicians of the grade of Dani-Vi, Guachosax, Marcos Miranda and vocalists such as Josephine Sweet, Nuria Swan,etc. The summer sessions that he has developed deserve a special mention, setting trends, first at the Zen nightclub (San Pedro del Pinatar), being a resident for 5 years, where the sounds gave way to mainstream, making thousands of people dance each summer. At the same time, he was resident at El Zeta (La Manga), which has been his home in recent summers, making Sunday afternoons a reference in the Levantine scene.These sessions at El Zeta afternoons have become very famous throughout the Spanish geography, making people from all over Spain and abroad takes a pleasant memory.He has also done sessions at parties Supermartxé World Tour and Matinee All Stars celebrated at “Teatre” and “El Zeta” Clubs, sharing booth with national and international dj, such as Albert Neve ,Taito Tikaro, Juanjo Martín, Wally López, Oscar L, André Vicenzzo, having great criticism by the public and industry of the area. We should also mention the sessions at parties in water parks in Murcia & Ciudad Real, “Aquatica” and “Maniatiks Pool Festival”, which made over 7000 people dance last summers. After all his work, he won in 2011 and 2012 the Murcia Deejay Local Prizes in the “Best Dj house Mainstream” cathegory. Since 2010, he uses in his sessions the Apple Ipad for mixing and controlling Traktor Pro, making people and professional staff being interested with his awesome work in creativity and versality in his sessions. Actually, Juanfra Muñoz, alone or with different formations, is involved in production , and has published in labels like Playmusic, Guareber, Suma , Whobear, Bedroom Muzik, etc, being supported by International Djs like Richie Hawtin, Chris Lawyer , David Herrero, Baramuda, Javi Colors, etc... His sessions range from the most elegant Classic House to electronic sounds and new trends. He is considered a very multifaceted dj, he supports all possible styles and does not stop researching every day to bring out the best to the dance floors wherever he goes. For him, the most important thing is his audience, let them enjoy and dance, always with good music, playing classic tunes, unreleased tracks, special edits and tools and music effects, always with his personal groove, achieving a visible connection, making the public go crazy in every session. If you have the chance to see him punch, he will not leave you indifferent, he is a whirlwind, he simply reflects the passion for music, the feeling of being privileged to do what he loves, and spreading this feeling to his public.More info on the next webs: www.f ac e b o o k.c o m/d jjuanf ramuno z www.s o und c lo ud .c o m/juanf ra-muno z www.yout ube.com/djjuanframunoz www.t wit t e r.c o m/juanf ramuno z www.d jjuanf ramuno z .c o m