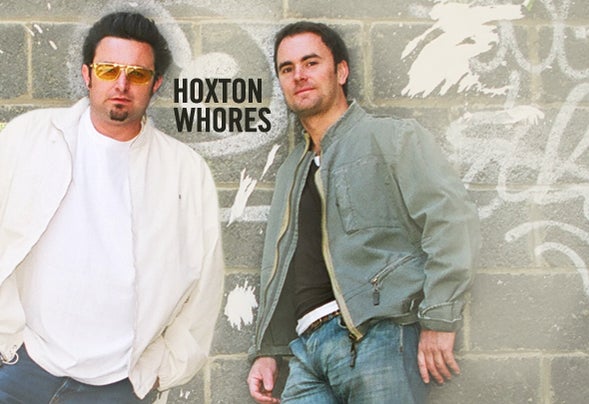 Gary Dedman and Kevin Andrews AKA the Hoxton Whores have been DJing and producing for over 15 years and are highly regarded as one of the most prolific producers of the dance industry today. The boys have co-produced and created monster anthems worldwide from their own studios in Hoxton whilst working with some of the greatest artists of our time. Their remix list is endless and includes the likes of Danny Howells, Faithless, Kathy Brown, Moloko & Todd Terry to name but a few… The boys first came together when they started a music distribution company called Essential Direct Ltd over 10 years ago. The label allows the boys to prove their love for the music, focusing on the creation of huge club tracks that instill a great party atmosphere and that can be used within their DJ sets. The style of music the record label likes to portray is mainly house orientated, but ranges from funky and uplifting, right through to dirty thumping electro beats. The boys enjoy making tracks that simply bring energy to the dance floor and give back something to the crowds that have been supporting them DJing over the years. After producing under many different pseudonyms Hoxton Whores was selected as the lead - the name derived from their studios being located in Hoxton and the fact many ladies of the night could be located in the area. The name has now very much come to light as the boys are inundated with remixes on a daily basis and have countless tracks signed to compilations. They are the only DJs to have 3 of their own tracks listed on Pete Tong’s current ‘Essential’ compilation. On the DJ front, the boys hold residencies at two of the most prestigious clubs in the world – Pacha & the Cross in London. Their extremely busy schedule regularly takes them to all corners of the world and it’s not unusual for the boys to try and fit in at least 4 gigs every weekend. Behind the decks expect a unique ‘Hoxton Whore’ performance with their signature blend of dirt-laced funky pumping electro and vocal uplifting house, combined with tones of tribal, dirty disco and large progressive beats mixed in. The boys can often be caught throwing records and CDs into the crowds – their legendary energy and unforgettable performance always hyping the crowd to the max. As we fly into the 2007 the boys are on the cusp of releasing their hotly anticipated debut artist album Hoxton Whores, ‘The Story So Far…’ The album is already creating massive interest and is due for release in March. The Hoxton Whores have created some of the biggest original tracks and timeless bootlegs that house music has heard in the last decade and there quite simply seems to be no stopping them… Don’t miss out… If you look to the right you can see a selection of diffent clips about tracks the boys have made which range from chart placings to write up about them and the music.