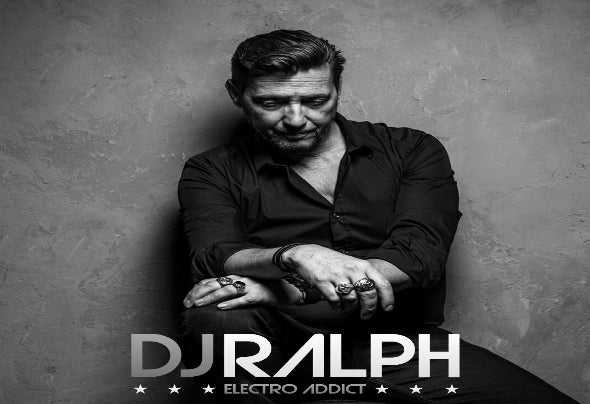 Pioneer of the French techno scene, DJ Ralph has one of the best track records of the French DJ scene. He started promoting electronic music in 1991 via the Tekmics agency. He rubs shoulders with the figures of the techno scene, from Laurent Garnier to Richie Hawtin. Very involved in the development of young artists, he was the first to believe in the potential of the duo Miss Kittin & The Hacker. With time, DJ Ralph crosses the musical barriers in particular via his meeting with Joachim Garraud at the beginning of the years 2000. His sounds are played by the biggest star DJs in the world, like Carl Cox, Laurent Garnier and many more... He travels across the five continents, to mix in prestigious festivals and clubs, from Las Vegas to Miami, Ibiza and more! His collaborations with his friend Avicii will increase his international fame. Creator of the Electro Addict, a community of clubbers, he manages the artistic programming and the management of many and some prestigious places like Le Village Du Soir in Geneva (CH). Signing his single "Redemption" with the label Jango and made a remix of the famous track "Velvet" by Toma Hawk. Moreover the remix "Follow me", in collaboration with Joris Mulen has revived the legendary anthem. A real return to the Techno sources is done with the release of "Protocol 19". Following this single, DJ Ralph continued on this momentum and released several singles in 2020: "Badaboom" and "Unlockdown". 2021 also saw several releases with "Crusher Punch", "Bonjour" and lately "Lifeline" a real techno production. Today DJ Ralph has returned to his roots with a sound resolutely techouse and techno as evidenced by his track scheduled for spring 2022 entitled "Telescope" and "The Underground" which is released on the label UNDGRD. His mix at Tomorrowland Winter 2022 was a sensation and confirmed his place as a leader and founder on the French techno landscape. His production schedule is more than complete but many signatures are to come.