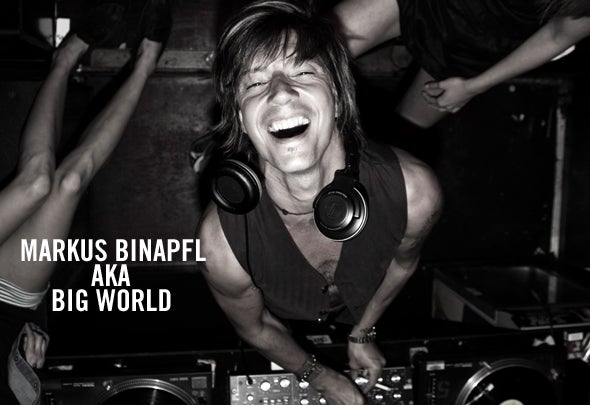 Berlin-based DJ/producer Markus Binapfl aka Big World needs little introduction; having been involved in the global music scene for more than a decade, he has an impressive string of successes to his name. He first hit the big time as a producer in mainstream pop music and has more than 200 releases, including a number of gold and platinum hits, under his belt. These days, Big World has left the world of pop behind and concentrates his talents on house music. His first single as Big World, "Morning Light" (2001) became a massive club hit, heralding the start of a new and exciting chapter in his musical career. Big World's countless releases to date have hit the charts worldwide; notable successes include "Fuerza" reaching number 3 in the Beatport chart in 2006 and the re-release of "Morning Light" in 2007 not only charting at number 7 on Beatport but also hitting the number 1 spot at DJtunes.com. Among Big World's dance chart-topping tracks, you'll find releases on first-class labels such as Defected, WePlay, Sony, Universal, Ministry of Sound, and Subliminal to name but a few. Big World's touring as a DJ has taken him around the globe, with appearances in Europe, Russia and the US; in 2008, Big World was booked for the Ministry of Sound tour in Germany. Until recently, he was resident and booker at Hamburg's celebrated Halo club - a venue which has played host to some big names including Deadmau5, Tom Novy, Timo Maas and Loco Dice. Of his renowned DJ sets, Big World comments, "No matter what you do on stage or what your instrument is, the interaction with the crowd is the most important thing when playing live. It's a give and take thing and when the energy starts to flow and the audience becomes one with the playing artist, then you know why you are doing this." COLLABORATIVE PROJECTS BRING FURTHER SUCCESS Electronic side-project Kaiser Souzai, which sees Big World working with Patrick Buck, has made a massive impact on the minimal and tech scene and received huge critical acclaim. Two albums have so far been released on Residenza Recordings - "Residenza 1" and "The Floor Files". Their 12inch releases, most of which are on Milk & Sugar's Rotor label, include "Monique" and "Girl" and have not only been club hits but also topped vinyl sales and digital download charts. Kaiser Souzai tracks have been featured on leading electro compilations including "Rock The Disco" (Seamless) and Steve Lawler's "Viva" (Ministry of Sound). Big World has also worked in collaboration with Denis The Menace and the pair have produced some exciting tracks. "Going Back To My Roots" was released last year on Subliminal; with support from Bob Sinclar, Erick Morillo, Roger Sanchez, Carl Kennedy, Sergio Flores, Plastik Funk, Phats ´n Small and many others, it hit the coveted number 1 spot in the Beatport House Chart. Their remix of Delinquent's "My Destiny" followed, getting the tastemakers' stamp of approval as it reached number one on the Cool Cuts Chart. The last couple of years have seen the duo go from strength to strength and one of their most recent releases – "Fired Up" – is no exception. Signed worldwide to Nero/Joia, there has been a huge buzz around this track with support from the likes of Axwell, Eddie Thoneick, Sebastian Ingrosso, Tom Novy, Bob Sinclar, John Dahlbäck and Jonathan Ulysses adding further fuel to the fire. FIERCE NEW TRACK ON AXTONE: "THE FIRST REBIRTH" Latest release "The First Rebirth", on Axwell's esteemed Axtone label, has already stirred up a lot of excitement and has seen support from such heavyweights as Tiesto, Armin Van Buuren, Steve Angello, Tom Novy, Dirty South and Sebastian Ingrosso. Radio plays include Kiss FM, Juice FM, Radio City and Energy FM.